Being Denied Service For Affirming Reality

In New York City you can be denied service in any establishment for insisting that a man is a man, or otherwise denying the invented personal reality of “trans”-persons by not using their preferred personal pronouns.*

“So people can basically force us — on pain of massive legal liability — to say what they want us to say, whether or not we want to endorse the political message associated with that term, and whether or not we think it’s a lie.

“We have to use ‘ze,’ a made-up word that carries an obvious political connotation (endorsement of the ‘non-binary’ view of gender). We have to call people ‘him’ and ‘her’ even if we believe that people’s genders are determined by their biological sex and not by their self-perceptions — perceptions that, by the way, can rapidly change, for those who are “gender-fluid” — and that using terms tied to self-perception is basically a lie.”

Reality is not subjective.  Reality is not a “social construct”.  It is one thing to believe oneself is a man or a woman or any other invented gender, but it is quite another to use the power of the government to force not only businesses, but other patrons to bend their speech to one’s will.  Remind me again just who has power and privilege?

Volokh just complains that this strikes right at the heart of free speech: 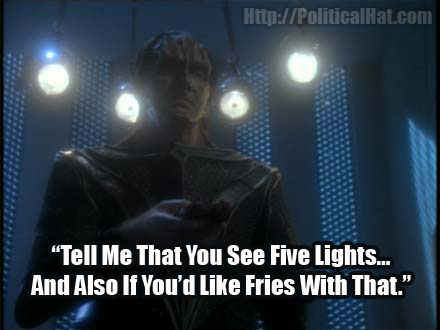 Unfortunately, Volokh doesn’t seem to realize that that ship has already sailed.  The Gay Wedding cases involving bakers, florists, photographers have already established that when you try to make a living, you surrender your fundamental liberties; or, as a New Mexico Supreme Court Justice noted:

“The Huguenins [who were wedding photographers who declined to use their creative talent to celebrate a Same-Sex Marriage] are free to think, to say, to believe, as they wish; they may pray to the God of their choice and follow those commandments in their personal lives wherever they lead. The Constitution protects the Huguenins in that respect and much more. But there is a price, one that we all have to pay somewhere in our civic life.

This, then, does not just apply to those who serve customers, but to the customers themselves.  It is a Hobson’s choice: You aren’t forced to engage in business or shop at one, therefore you can be required to do what you are told because you choose to not live your entire life alone in the dark at your home in the closet.

This gets even more bizarre when it involves not just a “preferred name [or] pronoun”, but any “title” that one demands!

“What’s more, according to the City, ‘refusal to use a transgender employee’s preferred name, pronoun, or title may constitute unlawful gender-based harassment.’ The label ‘harassment’ is important here because harassment law requires employers and businesses to prevent harassment by co-workers and patrons and not just by themselves or their own employees; this is particularly well established for harassment by co-workers, but it has also been accepted for harassment by fellow patrons. So an employer or business that learns that its employees or patrons are ‘refus[ing] to use a transgender employee’s preferred’ pronoun or title would have to threaten to fire or eject such people unless they comply with the City’s demands.”

This isn’t limited to titles like “mister” or “miss”, but any religious title, or any other title one associates with an invented gender!

“Or what if some people insist that their title is ‘Milord,’ or ‘Your Holiness’? They may look like non-gender-related titles, but who’s to say? What if someone decides that one of the 56 genders is indeed especially noble or holy and that those really are the preferred gender terms? Or even if ‘Your Holiness’ is understood as purely religious, … presumably the same logic that applies to gender-related self-chosen titles would apply to religion-related self-chosen titles. Both sex and religious discrimination are, after all, prohibited by the same laws”.

From now on, your humble author demands you use “hat/hats/hatself” pronouns and use my preferred title of “Hats Glorious Lordship of Time and Space, God-Emperor of the 5th Dimension, El Queso Grande hatself”… or else you will have to fork over a quarter million dollars!

I further suggest that business, in addition to asking what a customer’s “preferred gender pronouns” are, turn on four lights and deny service to anyone who says, when asked, that they see four lights, because if your subjective reality dictates that the number if “five”, than shouldn’t others be forced to conform to that?

*            Apparently “preferred gender pronouns” is an offensive phrase because it suggests that the use of pronouns is a “preference” and not the subjective will of others being made real by virtue of their power and privilege.

3 Responses to Being Denied Service For Affirming Reality