Bernie Sanders, A Candidate of Failure, Envy, and Scapegoating

Bernie Sanders is a bitter old man.  He is also a failure who can only draw a steady paycheck by sucking off the government teat as a politician:

“His family managed to send him to the University of Chicago. Despite a prestigious degree, however, Sanders failed to earn a living, even as an adult. It took him 40 years to collect his first steady paycheck — and it was a government check.

“‘I never had any money my entire life,’ Sanders told Vermont public TV in 1985, after settling into his first real job as mayor of Burlington.

“Sanders spent most of his life as an angry radical and agitator who never accomplished much of anything. And yet now he thinks he deserves the power to run your life and your finances — ‘We will raise taxes;’ he confirmed Monday, ‘yes, we will.’

“One of his first jobs was registering people for food stamps, and it was all downhill from there.

“Sanders took his first bride to live in a maple sugar shack with a dirt floor, and she soon left him. Penniless, he went on unemployment. Then he had a child out of wedlock. Desperate, he tried carpentry but could barely sink a nail. ‘He was a shi**y carpenter,’ a friend told Politico Magazine. ‘His carpentry was not going to support him, and didn’t.’

“The only thing he was good at was talking … non-stop … about socialism and how the rich were ripping everybody off. ‘The whole quality of life in America is based on greed,’ the bitter layabout said. ‘I believe in the redistribution of wealth in this nation.'”

In other words, he is a failure, and he blames his own failure on others, specifically on Wall Street and eeevil bankers who clearly are to blame for making him a failure due to some eeevil scheme and financial plot (that Sanders is ethnically Jewish is beyond mere irony).  He envies those who are successful, and he wants to bring them down.  As Margaret Thatcher would say, he would rather the poor be poorer provided the rich were less rich. 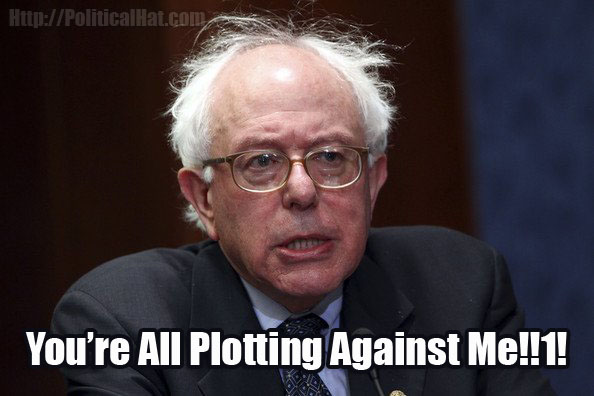 He is a petty person, and a horrible human being:

“Sanders was always full of himself: pious, self-righteous and utterly humorless. Burdened by the cross of his socialist crusade, he was a scold”

Will he appeal to America at large?  Perhaps enough to be elected, but not enough to unify the country.  Certainly not nearly enough to not be a failure as a President.

This entry was posted in Elections, Progressives and tagged Communism, Democrats, Leviathan. Bookmark the permalink.

One Response to Bernie Sanders, A Candidate of Failure, Envy, and Scapegoating