During China’s “Cultural Revolution”, students were organized into a paramilitary social movement to be the vanguard to destroy the old way of thinking and institute a more socially just ideology.

In an equally obvious attempt at astroturfing, organized groups at college campuses across America has “spontaniously” arose demanding that incorrect speech be banished, incorrect races denies access to “safe spaces”, and that already liberal to hard Left administrations cater to the whims of pampered and elitist students. 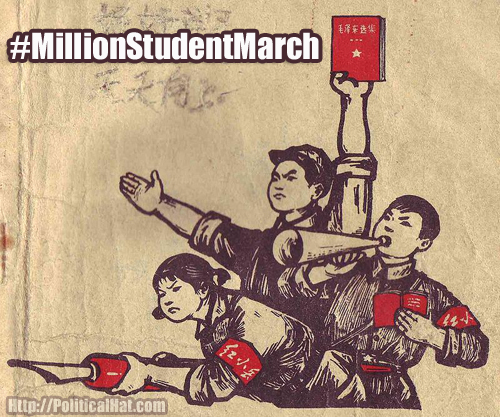 The lit match in this Leftist tinder was the now infamous “poop swastika” at the University of Missouri (AKA “Mizzou”), which was reported and under investigation.  While this “poop swastika” did exist, it is far from clear whether this is a genuine expression of racial hatred, or if is a giant hoax.

Never letting a crisis go to waste, the student body president at the university decided lie and declare that the Ku Klux Klan was invading the university.

Despite this being an admitted lie, a Professor at the university was made a target and example of for daring to… hold class and an exam.  Not being happy at purging a professor, they forced the President and Chancellor of the university to not only resign, but beg forgiveness.

Unsurprisingly, the top protest leadership includes an intern for Democrat Sen. McCaskill, as well as an oppressed hunger striker who comes from a family worth $20 MILLION DOLLARS.

Their demands were simply that the university dismiss any requirement for evidence in declaring racism, declare war against “White privilege,” end free speech, rewriting curricula to conform to a narrow Social Justice worldview, and, of course, FREE STUFF!

Also, they demand a “safe space” where people are excluded based race, amongst other factors.

This insanity spread in a not-so-organic fashion across the country.  Students at the University of California, Irvine, infamous for the anti-Semitism on campus, made similar demands. Students at Perdue have outright demanded censorship and “revision” of the 1st Amendment. Claremont McKenna College, for example, saw a Dean of Students forced to resign for daring to suggest that a student that felt oppressed didn’t “fit our CMC mold.”  This created a protest wherein privileged and elitist students whined incessantly about being oppressed despite having the power to not only force the Deans resignation, but get school officials to verbally self-flagellate.  Perhaps the sadist part was when one student told of an actual racist encounter… with a Black male and how a White woman came to her aid.  Needless to say, she was shouted down and almost physically dragged away for expressing this thought crime.  Liberal and anti-SJW Youtuber, Sargon of Akkad, fisked the video of this shameful display.

The display was so sad and pathetic, that the school newspaper condemned both the protesters and the spineless administration.

Even more sad and pathetic was the temper-tantrum at Dartmouth, where #BlackLivesMatter protesters stormed into the library to disrupt students who were actually try to study. College students, of all races and both sexes, are becoming increasingly feral…with the administration increasingly abandoning students who want to learn to placate these feral yutes.

Perhaps the most telling incident happened at Yale, where in a spoiled brat declared that the purpose of a college is not “intellectual” but rather to create a “home” where students would feel part of a coddled community.

The Yale whiners made similar demands as students at other schools.  The administration under siege, however, does not deserve any sympathy, for they were the ones responsible for this fundamental transformation of institutes of higher learning into indoctrination centers for cultural Marxism.

What recourse, then, do the sane people of America have?  University and college campuses have transformed from places of learning and open academic debate, into monocultures where dissenting thoughts are declared unthinkable.

With the laughable claims that colleges, consistently one of the most Left-wing institutions in the United States, are somehow controlled by the KKK and oozing “White supremacy”, being dismissed as simply crying wolf, is there any doubt that at the very least an intellectual enema is required?

Once upon a time, university leadership stood up against these bullies.  But that time seems past.  The question is increasingly not could we save universities, but should we.  These breeding grounds of the modern day Red Guards raise the question of not only should we let the universities as they exist now collapse, but if they need to be proactively abolished, and ironically enough, rebuilt from scratch.  http://www.powerlineblog.com/archives/2015/11/where-is-sam-hayakawa-when-we-need-him.php