When the Levee Breaks

The Feudal elite of California is apparently far to busy playing choo-choo train with the high-speed rail to nowhere or playing around with fetal stem cells to actually take care of the state of California.

A major earthquake in the Sacramento-San Juaguin river delta, with a healthy dose of liquefaction, could easily destroy the water supply for much of the state… and potentially drown countless innocents:

“Most of the state’s water is drawn from the Delta, protected by levees that pretty much amount to mounds of dirt, even when compared to infrastructure that infamously failed New Orleans during Hurricane Katrina. Hurricanes don’t hit NorCal, but these levees are alarmingly susceptible to disaster. If enough were to breach—in an earthquake perhaps, or severe El Niño storm—sea water from San Francisco Bay could rush in, tainting the water supply serving two-thirds of the state. The worst-case scenario could cause up to three years of severely curtailed water for most Californians.

“Even if you’re not a California dreamer, this affects you. Delta water keeps Hollywood in the movie business, Silicon Valley in the tech business, and 750,000 acres of farmland in the business of producing half of America’s veggies, fruits, and nuts. If the levees go, so goes the water for 25 million residents of the world’s seventh largest economy.

“The Delta is a singular place, even in California’s varied geography. Most of California’s interior water flows into two river systems—the Sacramento from the north, and the San Joaquin from the south. Where they meet, just east of the San Francisco Bay, they form a muggy tidal marsh with more than 70 inhabited islands. Most of these islands sit below sea level, due to groundwater pumping and natural compaction, and are ringed by tall, earthen levees. ‘An island in the Delta is really a bowl surrounded by a levee,’ says Dave Mraz, chief levee engineer for the state Department of Water Resources. ‘If that levee goes, then that bowl is filled with water.’

“Since 1900, over 160 levees have breached in the Delta. Several breached islands were never reclaimed, and now exist only as levee-top lagoons.” 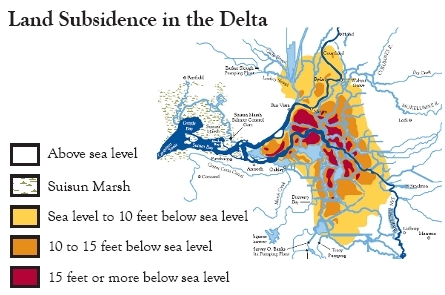