In rebelling against Western Civilization as it was, from the Jacobins to the modern Progressive movement, the normalization of homosexuality to the point of unprompted legalization of Same-Sex Marriage served to toss out old mores and replace them with new ones.

But the point of that change was no “Gay Rights” but the upending of Western Civilization, by which “Gay Rights” was only a tool.  That has perhaps run its course, with a more potent way of destroying Western Civilization that the Leftist Elite in Europe fancy they would have the power to replace and rebuild, now being available: Militant Jihadis.

Why bother slowly mutating society when you can just import the destructors directly!

The ironic thing is that tolerance for homosexuality was derived from Western Civilization’s unique tendency towards tolerance, with most non-native-European cultures disdaining it thoroughly ­— to the point of throwing homosexuals off a building.

The LGBTQ&c. crowd have served their purpose, and will be thrown under the Islamic bus.  Now this insanity has come to Canada, where an atheist teacher who ran a Gay-Straight Alliance club who made such statements on Twitter as:

“I’m sorry but sharia law is incompatible with my democratic secular nation. You can have it, but keep it over there in backward land.”

Unsurprisingly, he was fired. 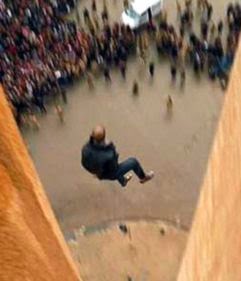