The norm throughout history has been that different peoples are different, and that one people would either replace another peoples culture, or even replace them outright genetically.  That is the default, and a default which is still the norm in this day and age throughout most of the world.  The great exception to this is the exceptionalism the embodies America.

Ours is a civic heritage that transcends ethnicity and is not restricted by geographic extent.  And because that is so ingrained into the very essence of America, that there is a revulsion against the global and historical default to define a people by blood or land.

And so, the not-so-great hullabaloo of the “cuckservative” flap reared its head.  The vast majority of conservatives, including the veritable Ace of Spades, the veritable Stacy McCain, Erick Erickson, the folks over at HotAir, and especially SooperMexican (who was subject to rac­ist insults), have outted the White supremacists who are pushing the term — though the term has had its defenders. 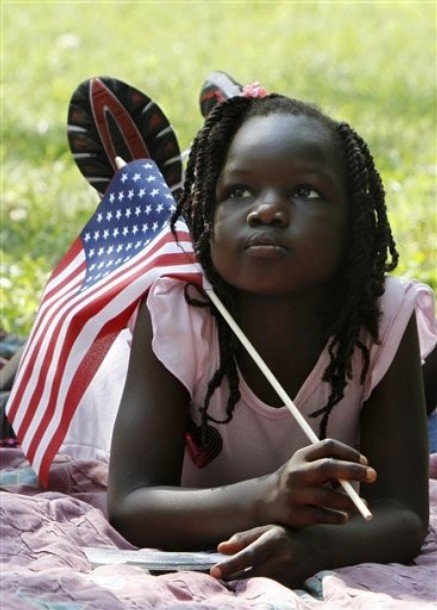 This tribalism, which is the default found almost everywhere and else throughout history, is rejected.  But this ancient tribalism is not the pseudo-scientific racism propagated by the eugenic loving Progressive ideology of un-American elitists.

The Progressive Left have, from the inception of Progressivism as a bastard cousin of other far Left examples of insanity, pushed pseudo-science as an absolute truth to be followed, with pseudo-scientific texts acting as catechisms of a secular text.  From Social Darwinism, to the eugenics of Planned Parenthood’s found Margaret Sanger, treating people as just a part of a collective identity.  They reduce a person as just a part of a whole.

If “White people” have to apologize for anything, it is that the ideological Left were the aborted brain children of White people such as Marx and Rousseau.

This appeals to the default mentality of the world where blood and land define a nation or group, and the different peoples are different.  But in their mad drive to destroy Western Civilization, and America in particular, they have created a double standard where America’s innate revulsion to reducing what is means to be American to simple tribal nonsense is exploited to denounce any cry by White people for racial unity in the face racially based hate, while exploiting America’s innate guilt that non-Whites have been treated unfairly to ignore non-White groups that demand the same.

These groups and individuals who used “culkservative” to rage against racial marginalization are defaulting to the tribal norm that has held back humanity throughout the world and throughout history.  It is a rejection of American Exceptionalism, just as much as the Progressivism is a rejection of the same.

But it is true that destroying Western Civilization and America more specifically is a goal of the Progressive Left in order to create a “blank slate” upon which they may paint their deluded pseudo-utopias.  Sweden is but one international example, but this drive towards eliminating White people eliminated in a “soft genocide” does exist and there are indeed those who would love to do exactly what many of the “anti-racism” crowd most fear.

Despite the Progressive Left having infiltrated most formerly respectable institutions of society via their Gramscian march, American Exceptionalism has yet to be extinguished.  During the riots after the Rodney King verdict, Reginald Denny was beaten to within an inch of his life by violent thugs who happened to be Black; he was rescued by upstanding human beings… who also happened to be Black.

And that is how we divide people!  Not by race, but by their actions.  In America, where “diversity,” “multi-culturalism,” and a rejection of integration have reduced America’s ability to assimilate to an all time nadir, there is still hope that that rare and precious essence of America — where once “outside groups” from Catholic Irish and Germans in the past, to Vietnamese “boat people” have been accepted as fully American — is and always will be triumphant over Progressive divisiveness, and the default tribalism over which America stands with rejection and disdain.

I can answer without hesitation.

This entry was posted in Progressives and tagged Kyriarchy, Leviathan, Patriotism, Social Justice. Bookmark the permalink.

One Response to American Exceptionalism and Progressive Racism