Is There Anything More Racist Than A Progressive Country?

“The Swedish flag has now been banned at a primary school in Sweden. The reason is that the flag may be offensive to certain groups and breaking the law ‘offensive against ethnic groups.'” 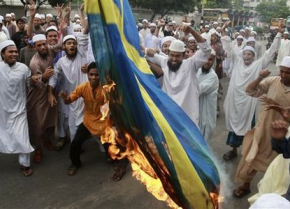 The flag of the country most willing to take in people who hate it and even bend over backwards to shield those people form the effects of assimilation is somehow offensive to those people?

And apparently Sweden’s own flag is illegal… in Sweden.

“Akerlund also believes that by using the Swedish flag one may be guilty of violating the racism law.”

When a country declares itself to be evil, the only “socially just” course of action is suicide.

And suicide is exactly what Sweden is committing.

Is there any doubt that this will start happening with increasing frequency in the United States?  Already the courts allow schools to ban the American flag, though due to the 1st Amendment they had to use the excuse that a “climate of racial tension” allowed the school to ban the image of the flag.  But then, in this era of “racial healing” the excuse could be extended more generally.  Of course, this would never happen to the Gay Pride flag or the Pan-African flag because instead of banning them due to a “climate” of “tension”, the Left would insist on going after those who might be violent (proactively, of course).

This entry was posted in Progressives and tagged DOOM, Europe, FAIL, Social Justice. Bookmark the permalink.