America Down the Memory Hole

“It’s just the #ConfederateFlag,” they say, “and if you don’t support purging it from history, you’re racist!” But it isn’t just about the flag soldiers flew a century and a half ago.

It is right and proper for the government to not fly the Confederate battle flag, nor to display it outside a museum.  If a company wants to refuse to sell it, or allow others to use their service to sell it, on moral grounds (while supporting NAZIs), that is their legal right (Gay Pride flags, OTOH…).  But there is a boarder societal effect of banning anything that the baying mobs of Political Correctness demand.

Why not the Flag of the United States of America itself?  That is not a hypothetical, but something that pointy headed ivory tower idjits are already demanding. 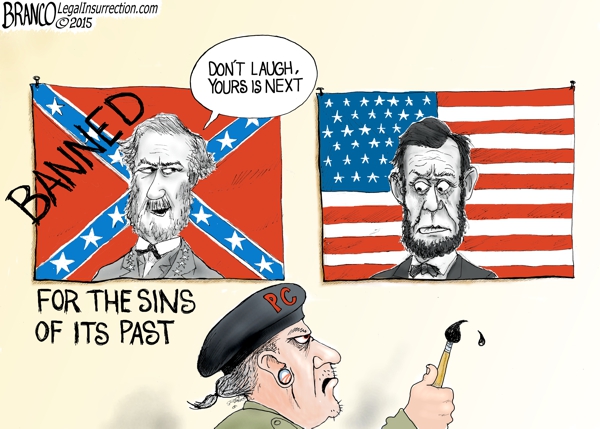 This is another Kobayashi Maru scenario: You either loose by defending something that is connected to racism and slavery, or you concede and allow the Left to go on to another target.  Overtime they will make more and more things declared racist.  The end game?

The veritable Stacy McCain warns how this is a dangerous precedent:

“The rush to ban display and sale of the Confederate flag in the wake of last week’s shooting in Charleston should cause concern for any person intelligent enough to understand how such precedents, once established, are often used to justify further aggression by Cultural Marxists.

“They often argue by analogy, saying This Offensive Thing is exactly like That Historic Atrocity in order to justify the suppression of anything that can be deemed ‘offensive.’ In confrontations with the Cultural Marxist, therefore, we are never arguing merely about the point in controversy — e.g., gay marriage or the Confederate flag — but we are always aware that ceding the immediate point will embolden them to some further demand because, after all, Progress must always march forward.

“Whatever it is the Left is arguing against will predictably be compared to the Holocaust — or slavery, or ‘McCarthyism’ — and disagreeing with the Left thereby makes you a Nazi Who Wants to Kill Six Million Jews.”

This has quickly become farce.  Apple will ban apps that display the Confederate Battle Flag… even if it is in educational strategy games that are simply being historically accurate!

In effect, the rabid Left is declaring: “Ban ALL the history!“

The veritable Ben Shapiro goes further and notes that the Left basically want to send the battle flag to the “memory hole“:

“The banning of the flag from the statehouse does nothing to make the state less racist (in fact, the entire media seem eager to ignore the fact that 100 feet from the Confederate war memorial that carried the Confederate flag, there is a massive and beautiful black history monument on the statehouse grounds). Neither does removing products from Amazon or removing monuments to historic American – yes, American – figures.

“But that’s not the point. The point is to pretend that mass racist murderers and those who honor the Confederate flag are identical groups, and that by defending one, you defend the other.

“The left, meanwhile, seeks to bulldoze history and free speech in pursuit of utopia. Offensiveness, justified or not, justifies the sledgehammer. In this respect, it becomes difficult to distinguish between the terrorists of ISIS jackhammering ancient idols in Iraq or the Taliban blowing up Buddhist statues in Afghanistan from those who would raze Confederate monuments. No one has to like Confederate war monuments and memorials, but every civilized person should recognize their historic and cultural value – even the value in constantly remembering their use for and association with evil causes including slavery and Jim Crow.

“But the left recognizes when it has an advantage and has decided to press forward.

“American history and culture are replete with symbols and symbolism. Every historic symbol can be invested with a variety of meanings, some with more credibility and some with less. But banning history does no one any service; as George Santayana said, “Those who cannot remember the past are doomed to repeat it.” And those who destroy the past are complicit in that task.”

Where does it end?  It never ends.  The Left need a boogie-man to justify themselves.  As the veritable Ace of Spades noted, the Left truly believes: “Let’s Ban All the Things“ 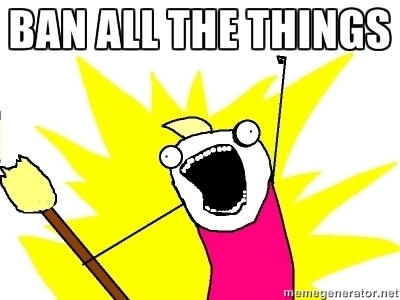 This entry was posted in Progressives and tagged Kyriarchy, Patriotism, Social Justice. Bookmark the permalink.

One Response to America Down the Memory Hole