Federal Government to Sacrifice Your Children’s Health to Gaia

Recently, concerns were raised about the Federal Dietary Guidelines being updated with Gaia being placed before lowly human beings.

“In December, the Associated Press (AP) reported that the Dietary Guidelines Advisory Committee (DGAC) of the USDA would make recommendations based on nutritional considerations, as it has done historically, as well as environmental impacts.

“According to the AP report, the committee’s draft read that a plant-based diet is ‘more health promoting and is associated with lesser environmental impact than is the current average US diet.’

“While the DGAC did review literature on sustainable diets, the USDA says the effects of food production on the planet will not factor in to its final dietary guidelines.”

Unsurprisingly, they lied, and are now touting “plant-based” diets for “sustainability” rather than explicit worship of mother Gaia.

“The federal committee responsible for nutrition guidelines is calling for the adoption of ‘plant-based’ diets, taxes on dessert, trained obesity ‘interventionists’ at worksites, and electronic monitoring of how long Americans sit in front of the television.” 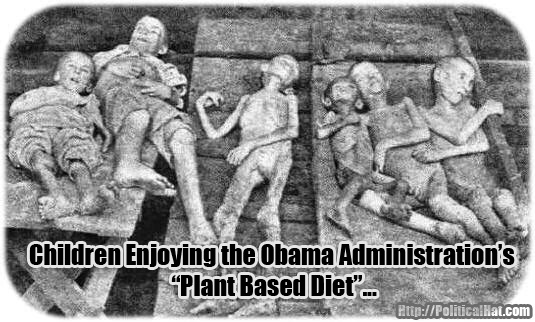 “DGAC proposed a variety of solutions to address obesity, and its promotion of what it calls the ‘culture of health.’

“In response, DGAC called for diet and weight management interventions by ‘trained interventionists’ in healthcare settings, community locations, and worksites.”

“The amount of sedentary time Americans spend in front of computers and TV sets is also a concern to the federal panel.

“They recommended ‘coaching or counseling sessions,’ ‘peer-based social support,’ and ‘electronic tracking and monitoring of the use of screen-based technologies’ as a way to limit screen time.

“The screen-time recommendations came from The Community Guide, a group affiliated with the Centers for Disease Control and Prevention, which reviewed studies that used an ‘electronic monitoring device to limit screen time’ of teenagers.”

They are already sharpening their teeth, and demanding that daycare for small children obey their culinary editcts.  Little surprise seeing as Michelle Obama is having her disastrous “healthy food” initiative run by a “Food Justice Advocate“.

If anyone complains, just toss out an unscientific rant about eeevil corporates pushing eeevil “frankenfood”…

But ya, just keep on whining about Monsato and dreaming of a world where all those children saved by Golden Rice had dies due to malnutrition.

Much like how Cultural Marxism sought to warp society such that Marxist ideas were welcomed, the anti-GMO people want to create a world where Malthusian insanity becomes reality.

The full report can be read below:

Let us remember the wisdom of “Weird Al” Yankovic: