Purple Penguins and the Abolition of Gender

The Progressive march towards a “non-gendered” world has been acceleration as of late.  The terms “Mother” and “Father” are set to be purged from California law, the pronouns “he” and “she” can now apply to anyone, and even stating a baby’s visually obvious gender is considered child abuse.

But it is in the schools where this Gramcian march is doing the most damage.  Not only is “gender” considered separate and distinct from one’s biological sex, but a plethora of new “genders” AND “sexes” are being invented.  This divides people up into such a myriad of classifications, that it all blends together again into an androgynous lump… which the Progressive left wish to mould. 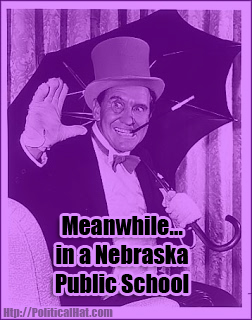 The abolition of the notion of “gender” is now being forced on small children.  Teachers are to no longer refer to “boys” or “girls” but rather a gender neutral term like “purple penguins.”  Any distinction based on their biological sex is not only prohibited for the teacher, but for the children themselves:

“If teachers still find it ‘necessary’ to mention that genders exist at all, the document states, they must list them as ‘boy, girl, both or neither.’

“Furthermore, it instructs teachers to interfere and interrupt if they ever hear a student talking about gender in terms of ‘boys and girls’ so the student can learn that this is wrong.

“‘Point out and inquire when you hear others referencing gender in a binary manner,’ it states. ‘Ask things like . . . “What makes you say that? I think of it a little differently.” Provide counter-narratives that challenge students to think more expansively about their notions of gender.'”

It is only a matter of time before gender neutral pronouns like “zir” be made mandatory at public schools… or even at private schools.

In the end, biological reality will trump this faux-scientific nonsense… but Western Civilization may not survive it.

One Response to Purple Penguins and the Abolition of Gender