Complaining about Boys being Boys

Probably one of the most noticeable complaint of the rabid feminists and advocates of abolishing the notion of gender is that boys will tend to act… like boys.  The drive to overrule biology and turn little boys into nothing more than girls with dangly bits is almost pathological. 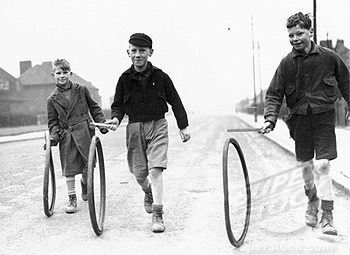 “Bookworm” over at Bookworm Room points out two pieces of advice he came across on how to raise boys.  The first is from a list called “Seven Memes That Will Change The Way You Think About Raising Boys” and has such comments as “We Believe In Men, Their Maturity And Compassion” (which by that it is meant that boys are emotionally and physiologically just like girls) or And One Day Soon, We Will Be Using the Expression “Boys Will Be Boys” To Describe This (thereafter is posted a picutre of three young boys treating dollies like they were themselves Mommies).  Further examples include “Because Men And Boys Can Be Nurturing Too.”

The second list is more appropriate to helping make sure that boys grow up to be good and virtuous men, worthy of being called men.  Such once-common-sense wisdom includes “Work Harder Than Anyone Else,” “Know that Marriage is a Covenant,” and “After You Screw Up, Step Up.”

There are, included in first list list, very spot on and sober statements like “Teach Your Son to Respect Women.”  The problem is that the approach of those articles ignore that fact that males and females act and interact differently.  While a man can be a wonderful father and caregiver, he likely not going to be like a mother with a external plumbing.  By playing up to boys who act girlish to give oneself a sense of “equality,” it does nothing more than harm boys by making them ill prepared for dealing with their masculine inclinations.  Many of the “bad things” are not bad, but are a sign of natural male inclination.  It is that later list which seeks to channel those natural male impulses into something good, rather than try to get boys to act like something that they are not.  As “Bookworm” states:

“I’ve often said that the Left wants to feminize boys, while conservatives should have as ‘their goal taking boy’s behaviors (their energy, their loyalty, their drive to leadership) and channeling them into virtuous values and conduct. These two lists seem to exemplify those different ways of thinking about transitioning boys to men.

“This is not to say that I reflexively disagree with the first list. Indeed, I strongly believe in several of the items on that list. It’s just that the list’s purpose doesn’t seem to have as its primary purpose taking ordinary, generic boys and turning them into ordinary, generic, and good men. Instead, its primary purpose seems to be to validate those boys who don’t have an excess of what I call “boy energy” (and I live surrounded by lots of very boy energy) and to insinuate that the best boys are the ones who, rather than channeling their boy energy to a more noble way of being, simply sublimate it altogether.”

James Taranto, over at the Wall Street Journal also points this out with a critique of the claim by Kay Hymowitz that men aren’t just being rational when they eschew school, work, and family.

“Hymowitz asserts–with support from economists–that boys and young men, in contrast with their female counterparts, are failing to behave “rationally.” That implies a mismatch between the young men’s objectives and their actions. But the first half of that equation is left unexplored. Hymowitz (and her economist sources) does not make an empirical inquiry into what young males’ objectives are. Instead, she assumes their objectives to be what she thinks they should be.

“Hymowitz would like men to organize their lives around maximizing their usefulness to women and children. Hey, what woman wouldn’t? But in invoking H. economicus, she ends up equating the goal of serving others with individual self-interest–an outright inversion of the latter concept.”

That Hymowitz is trying to describe men through a gyno-normative point of view, without even realizing it, is a sign of the privilege in come circles of the female point of view.

“Hymowitz laments that young males are insufficiently interested in “becoming reliable husbands and fathers.” Imagine somebody opening a piece with the converse lament that young females are insufficiently interested in “becoming reliable wives and mothers.” The author would be attacked as a misogynist and a dinosaur. Why, critics would demand, should women set their sights so low?

“Well, why should men? Except perhaps in very conservative communities, men with sufficient social skills can find sex and companionship without need of a matrimonial commitment (and for those who lack social skills, a willingness to marry is unlikely to provide much compensation). The culture’s unrelenting message–repeated in Hymowitz’s article–is that women are doing fine on their own. If a woman doesn’t need a man, there’s little reason for him to devote his life to her service. Further, in the age of no-fault divorce, “reliable husbands and fathers” not infrequently find themselves impoverished by child support and restricted by court order from spending time with their children.”

The rabid Left have destroyed a place for men in society and instead substitutes the bromide that they should just be “rational” and “in touch with their emotions” like women.

The problem with this is that men are not women, and no matter how much feminists and the rabid Left want them to act they way the Left wants them to, men will still act like men and act rationally according to the situation that society has presented them.  If their chivalry and protectiveness of women and children are not only dissuaded, but reviled, they will abandon it  If they have no male role model, then they will revert to a far more crass, and dangerous, state of an almost feral nature.  Why bother with achieving anything or raising a family when you can do just enough to get the latest GTA game to play with other young men in a similar situation or picking up loose women for one night stands to fulfill sexual desires?

You can not smash the pillars of our society and expect things to go swimmingly.

2 Responses to Complaining about Boys being Boys