Progressive Hypocrisy: Equality of the Sexes

In 1975, The courts decided that it was illegal for the Pennsylvania Interscholastic Athletic Association (PIAA) to ban girls from playing on boys team.  The reason?  Equality.

Progressives demand that girls be allowed to play on boys teams and to the things that boys are allowed to do, because it would otherwise be segregation and discrimination.  They further that they are not doing this to help girls and hurt boys because boys would have the same rights as girls, confident that boys wouldn’t actually do that.

The funny thing is, that many boys will do that.  This is due to Title IX.  One of the ways to be incompliance is to spend as evenly as possible between girls and boys sports.  Since football programs tend to eat up a lot of money, this leaves little money for many other sports and athletic endeavors for boys, while the girls’ teams for those same sports receive plentiful funding. 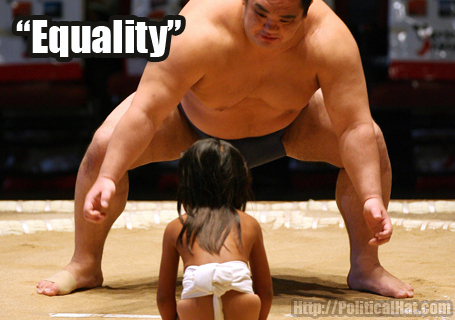 This is why many boys are not only joining the girls teams, but dominating them:

“Olivier Everts, a 15-year-old junior at Conestoga High School, has been the lead scorer on the girls’ field hockey team for the past two seasons while donning the same uniform as his female counterparts, kilt included. Like hundreds of other student athletes across the state, Everts is able to compete thanks to a 1975 court decision that invalidated a Pennsylvania Interscholastic Athletic Association (PIAA) rule that banned girls from playing on boys teams

“While PIAA officials do not track instances of cross-gender play, a recent survey of 599 schools found widespread participation across gender lines. Thirty-eight schools, for example, reported boys playing on field hockey teams, and 14 said boys played on their girls lacrosse squads. More than 100 schools allowed girls to play on their high school football teams, the survey found, and 112 reported high schools had girls on wrestling teams, the newspaper reports.”

The reason they want to re-segregate sports? Why, the “competitive imbalance boys were causing in their daughters’ field hockey contests.”

The worst part of sports teams with both boys and girls is that is teaches boys to treat girls the same way they treat boys: Physically, with aggression.

Progressives do not care about equality.  They never have.

This entry was posted in Progressives, Uncategorized and tagged FAIL, Gender, Kyriarchy, Social Justice, War on Women. Bookmark the permalink.