Once upon a time, segregation was considered to be abhorrent by so many, with the full weight of the Federal government used to stop states from segregating between whites and non-whites because “separate is inherently unequal.”  On the coattails of these Civil Rights victories, busing and forced “integration” were pushed, often under the guise of “diversity.”

That real Civil Rights legislation and victories have often been pushed by the so-called H8ers of the Right and/or GOP.  It is no surprise, then, that under that very same guise of “diversity,” Progressive zealots are enforcing segregation!  William A. Jacobson over at Legal Insurrection uncovers a blatant example of this: A diversity program entitled “Real Talk: A Dialogue about Internalized Racism” that declared that “In order to create a safe space, this program is open to people of color only.” 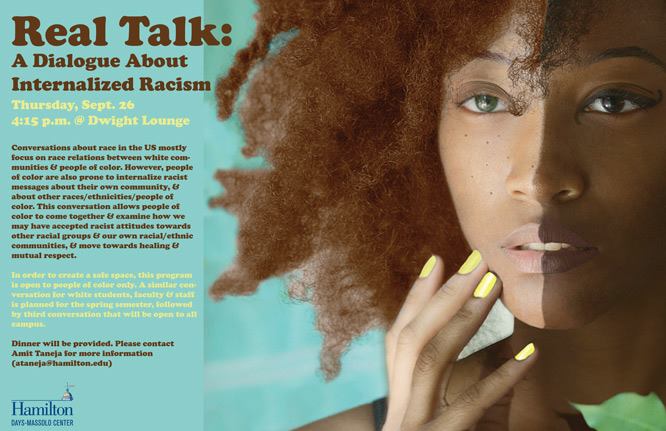 Sadly, this is consistent with the rabid Left’s redefinition of words to suit their purpose.  “Diversity” means putting people of different racial/income/&c. groups together when the Progressives want that to happen, but “diversity” means segregating people on those same characteristics when that suits their purpose.  This is but another example of Progressives’ belief in social corporatism, where people are denigrated into various classifications for which the “interests” of the various groups are pre-defined by the Progressives, so as to allow the Progressives to manipulate and “adjust” society under the umbrella of the state and thus under their control.

The university quickly canceled this nonsense once light was shined upon it, and the usual cockroaches scurried away from the light. This hasn’t stopped the usual suspects from the rabid Left from making threats of violence and verbal abuse from those who stood up to this segregation, with those who opposed segregation ironically being called “White Supremacists.” How many such programs are going on unabated because they haven’t gotten the same publicity?

For the Progressives, it was never about treating people equally.

One Response to The Progressive Creed: “Segregation Now!”