Laws upholding various social mores via normative power of the law have been struck down for decades now based on a “right to privacy.”  There is an expectation of privacy, as the requirement for warrants demonstrates.  But there is a difference between a general right to not have the government snoop on you, and a right to engage in some activity under the guise of privacy.

This however, began to change with the Supreme Court’s Griswold v. Connecticut decision.  They deemed that restricting a married couple’s access to contraceptives interfered with their marital privacy.  While married couples are usually given a legal right to be free of government interference, not dissimilar to that people have with their lawyers or a penitent with a priest, that right is not about protecting certain actions from the scope of government.

Whether activities ought to be within the scope of the law is an entirely different question.  That the two have been conflated is the beginning of how a “right to privacy” is being used to justify government endorsement and support, as well as the legal compulsion of 3rd parties to also subsidize and support, the voluntary actions of others.

No greater example of this can be seen than the “right to privacy” between a person and a doctor being re-defined such that both the government and private 3rd parties are required to be involved.  Take for example, the question of abortion.  Even if one accepts for the sake of argument that a child is not a child until ex utero, the “right to privacy” only extends to between the patient and the doctor (or perhaps also those that voluntarily included, such as with a spouse of parent).  Yet this “right to privacy” now includes a “right” to force others to violate their own moral conscious by requiring those other people to pay for said “private choice.” 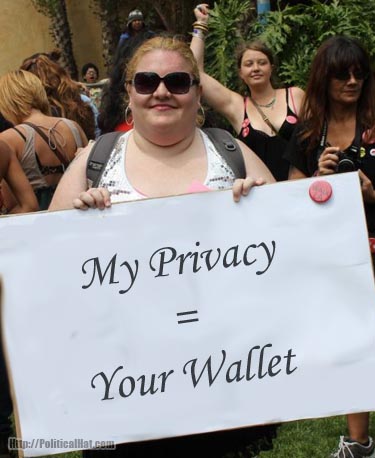 Something can not be 0% of my business yet 100% of my legal obligation to pay for.  Once one includes other people, it ceases to be a private matter between patient and doctor.  Now there may still be an expectation of privacy, as with medical insurance, but the insurer is choosing (or at least used to be able to choose) what they would cover.  But if a 3rd party is included, that “private issue” becomes their issue too.

Even that pretext is being eliminated.  Obamacare is now requiring the use of electronic medical records, which the government can access.  Further, Obamacare can be used to require that doctors violate confidentiality and be used to collect this information.

Simply enough, it is because the right to an abortion, sodomy, &c. are derived from the idea of a “right to privacy.”  In the case of sexual activities, it is based on the idea that the government can’t tell you what sexual things you can or can not do inside your own bedroom.  Many cases that followed Griswold v. Connecticut exploited this to expand outside of the bedroom and into other people’s lives.

Properly understood, a real right to privacy just means that the government can’t just butt in or snoop in the normal course of its proper functions.  It ought not to mean that certain private activities are necessarily enshrined as protected, or further, that those activities are protected even when they become a public issue!

You can not concomitantly declare you are exercising a “right to privacy” from government intrusion and demand that the government get involved to subsidize and support that “private” matter.

If the “right of privacy” were restricted to, well privacy, than the protected right to government funding (or the mandate that private 3rd parties fund), with abortions for example, disappears.  Similarly, the right to engage in aberrant sexuality ceases to be legally protected, in much the same way that just because an otherwise illegal action does not become legal simply because it is done in private.

Now, this does not mean that such activities necissarily ought to be illegal, or that a right to engage in this, that , or the other activity ought not to be legal, but only that the “right of privacy” properly understood is and ought not to be a legitimate justification for it.

Above all else, it is the hypocrisy of the Left that demonstrates that the “right to privacy” isn’t something they believe in, but is only an excuse to push their agenda.

This entry was posted in Progressives and tagged Leviathan, Obamacare, Social Justice. Bookmark the permalink.