Race as a Moral Concept

The obsession over race is a hallmark of the Progressive left.   Yet, they are willing, nay, enthusiastic about, condemning non-white individuals who dare to believe what the self-declared intelligentsia declare that they ought not to think.  Of course, they are also willing to declare a pasty white guy to be the “first Black President” back in the ’90’s.

How does one square away the left’s obsession over race with the left’s enthusiasm for attacking “oppressed minorities”?  To put it simply, “race” is not about race to them; rather, it is a moral concept of purity. 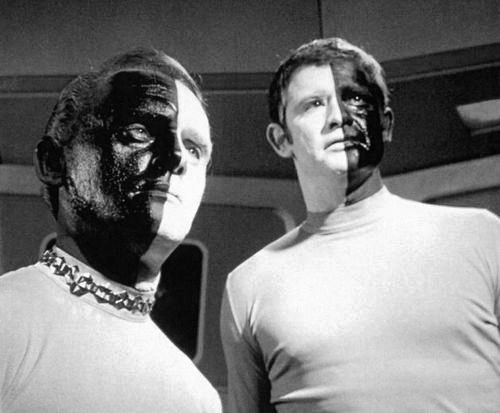 “Whiteness” is not about actual racial attributes, but is seen as a moral evil.  Thus, white people can be shrived of their sin of “whiteness” by fighting against the “kyriarchy.”  Similarly, a non-white person can fall from grace by accepting some attribute of “whiteness,” thus losing their status as a morally superior being.

Nowhere is this better seen than by the coverage of the Martin/Zimmerman trial.  Zimmerman is Hispanic and also part black (he is blacker than Homer Plessy was).  The partisan media pounced on the narrative of a pasty “person of pallor” gunning down a Black child.  When it was revealed that Zimmerman was actually Hispanic, they created a “white Hispanic” classification in order to distinguish it from the more morally pure “Hispanic.”  That Zimmerman was also part black was generally ignored by the media.

This lunacy has gotten to the point where leftist hacks have declared that Zimmerman isn’t even Hispanic because he is Peruvian… and that Peruvians are somehow not “Hispanic”!

So entwined are the ideas of race and moral purity in the minds of the Progressive left that they don’t even see the nonsensicalness of such idiocy!

Theirs is an ideology that is antithetical to our civil and moral heritage, and must never be treated with anything other than disgust.

This entry was posted in Uncategorized and tagged FAIL, Kyriarchy, Social Justice. Bookmark the permalink.

2 Responses to Race as a Moral Concept