There are ALWAYS Kulaks Around to Blame

Melissa Harris-Perry, a pseudo-scientist and talking head at MSNB☭, has yet again drudged the deepest depths of idiocy.  Detroit has been run by the far left for about half a century, primarily those of the Progressive and racialist bent.  The obvious result of that has been to make post-Empire Rome seem like a paradise in contrast.  The collapse of the cities populations has been precipitous.

Who does Harris-Perry blame Detroits problem on?  Any sane person would blame this on the people who run Detroit.  Harris-Parry, being the blathering idiot that she is, blames… republicans who believe in low taxes!

The key babblings of Harris-Perry are truly stupifying.

“In the case of Detroit, the reason that the tax base has become so small is because a loss of population, right? So folks out, they are not there to pay the taxes on the homes and the kind of deterioration is what you see in the numbers you’ve suggested. But this lack of tax base is also exactly the kind of thing that many Republicans would impose on us, even when our cities have sufficient populations, even when our communities have sufficient populations. This is what it looks like when government is small enough to drown in your bathtub, and it is not a pretty picture.”

Even though the Progressive left are obviously fully to blame for their own mess, Harris-Perry proves that the left will always find Kulaks to blame.  Even if they didn’t do anything, and even argued against the policies that created the current hellhole that is Detroit, they are still somehow to blame.  They are ALWAYS to blame. 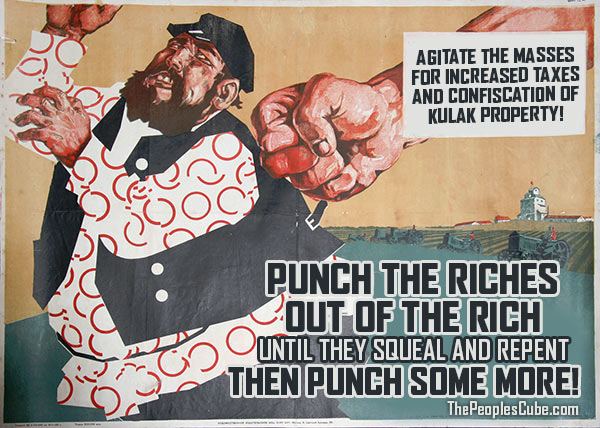 The Progressives could never admit to being wrong, because their whole world view would crash around them.  They need a boogie-man to blame.  If there isn’t one, they will blame one anyways.

One Response to There are ALWAYS Kulaks Around to Blame