What Nevada Needs is a Good Fracking!

It looks like the “ocean of oil” discovered previously in Nevada may very well be exploited after all. 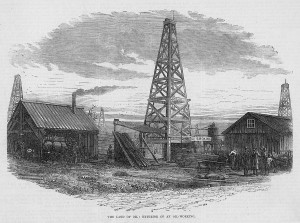 “[C] ompany officials said they have secured leases in Elko County totaling 350,000 acres. They plan to spend $130 million over the next four years to develop the project, which could produce as much as 50,000 barrels of oil per day by late 2014. That’s enough petroleum to match Nevada’s entire 2012 oil output in about one week.”

The main barrier to obtaining the oil is that the drilling will be utilizing hydrolic fracturing (i.e. “fracking”)., which has never been used in Nevada before.

Considering the financial boon that North Dakota has reaped from hydrolic fracking, this may not only revitalize Nevada’s economy, but attract productive people rather than the “locusts” who flee from leftist-dominated states only to vote the same type of idiocy in here.  Indeed, Nevada may very well turn-out to be one of the energy producing leaders in the country because of this.

With solar companies producing expensive energy with technology that is “not ready for primetime,”  and wind farms that are far more environmentally unfriendly due to their causing many endangered species to be pushed to the bring of extinction, the use of fracking in Nevada will result in energy that is cheap, profitable, and far more environmentally sound than the alternatives.

To prosperity and affordable energy!

This entry was posted in Science, Uncategorized and tagged Energy, Green, Nevada, Science. Bookmark the permalink.