Posted on February 8, 2022 by The Political Hat

A reasonable person might think that regardless of where one stands on the seemingly contentious issue of children having to wear masks in school, that at least it either scenario isn’t as bad as rape.

The people who run Stone Bridge High School are not reasonable people. 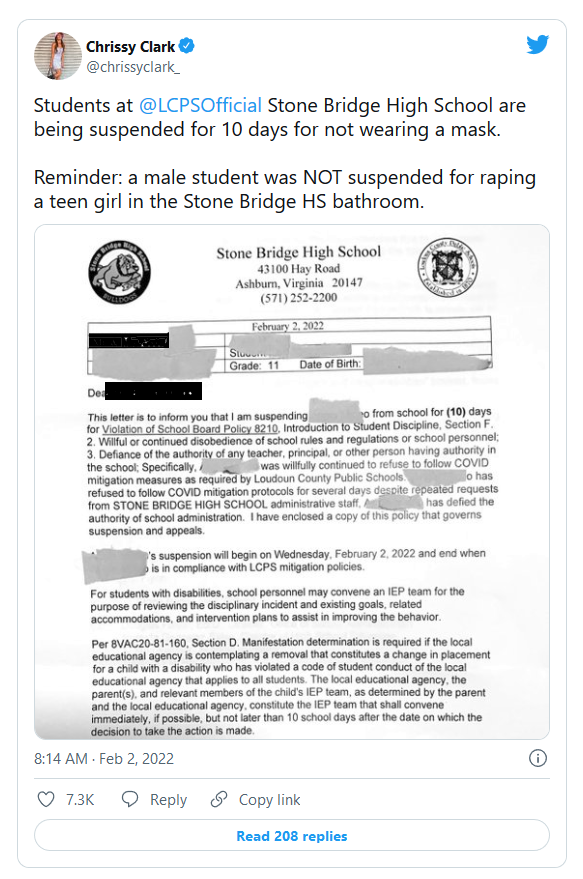 Disturbingly, this actually is consistent with the “logic” of the Critical Theory crowd, who view all interactions through oppressor/oppressed power dynamics.

Since transgenders are oppressed, they have no power, thus can’t be perpetrators/rapists and therefor can’t oppress “cis-het” girls. The oppressed have no responsibility or agency for what happened, since it is all the oppressors fault.

It is only “injustice” when it perpetuates systems of oppression and the power of the oppressors, while “justice” means nothing more than destroying those systems.

Therefor, under this ideology, a transgender raping a “cis-het” girl isn’t “rape” (since rape is what oppressors do to the oppressed), but a forgivable act of “justice” since it is a blow by an oppressed class (“trans”) against an oppressor class (“cis-het”).

Is this all crazy?

Update: It was pointed out that the original e-mail did not fully censor the individuals named in the later. It has been replaced by a screencap with the name fully blacked out.