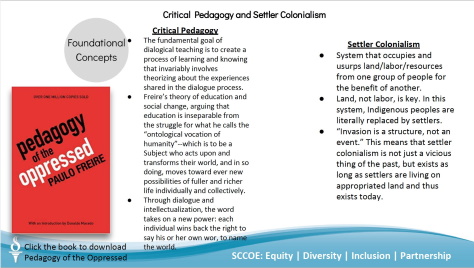 Critical Race Theory in schools is a form of political propaganda to achieve a mass movement by mandatory indoctrination into wokeness. Santa Clara County, in California, is pushing this “Diversity, Inclusion, and Equity” (AKA “DIE”) agenda through it’s Office of Education. Yet again, the veritable Crhistopher Rufo has obtained source documents.

SCOOP: Santa Clara County Office of Education denounces the United States as a "parasitic system" based on the "invasion" of "white male settlers" and encourages teachers to "cash in on kids' inherent empathy" in order to recruit them into political activism.

Last year, Santa Clara County held a teacher training on how to deploy "ethnic studies" in schools. The leaders began the presentation with a "land acknowledgement," claiming that the public schools "occupy the unceded territory of the Muwekma Ohlone Nation." pic.twitter.com/VLVSB9u2gO

The presenters claimed that America is a "system of oppression" based on the "invasion" of "white male settlers" and "exists as long as settlers are living on appropriated land." White males brought "white supremacy, patriarchy, classism, genocide, private property, and God." pic.twitter.com/3PoE2a8YKj

Notice the attack on “God/Religion”, specifically the “Settler[‘s]” God by the public schools?

So much for þe olde “separation of church and state”.

Jorge Pacheco, an adviser for the state ethnic studies curriculum, said that teachers must "awaken [students] to the oppression" and lead them to "decodify" and eventually "dismantle" the dominant political structures, which enable "white people [to exploit] people of color." pic.twitter.com/t5ut4mYS8i

The language in the presentation is pure Marxist conflict theory—oppressor-oppressed, praxis, synthesis. Pacheco acknowledged that the Marxist underpinnings "scare people away," but insisted that teachers must be "grounded in the correct politics to educate students." pic.twitter.com/2gUUruIIaM

The panelists advised local teachers to hide this political program from administrators and parents. "District guidelines and expectations are barriers," said one panelist. "[We] have to be extra careful … now that we're in people's homes [because of remote learning]." pic.twitter.com/jgq8A7RGL6

This curriculum will soon become commonplace for millions of California schoolchildren. Earlier this year, the state Department of Education approved a "model ethnic studies curriculum," championed by Pacheco and colleagues, who encourage recruiting kids beginning in first grade. pic.twitter.com/KPqUpDGdnx

One Response to Woke Political Propaganda in Santa Clara