While some cities’ and counties’ leadership is fully on board with the woke demand of “defunding the police” or otherwise more honestly wanting to abolish the police altogether, others are worried of losing their phoney-baloney jobs and would have to be tricked into it with soft words and seemingly innocuous statements between crazed nonsense.

On such example of this is the “Forced Trajectory Project” with alleged “common sense solutions” to policing via 36 “demands”.

That this list of demands presented to the Nevada legislature for it’s special session to cover budget shortfalls was at least in part being due to the death of a suspect who “reached and grabbed for a gun that had fallen to the ground, and turned towards one of the officers” at the scene. 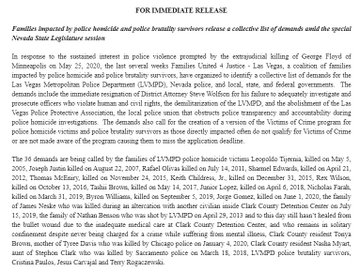 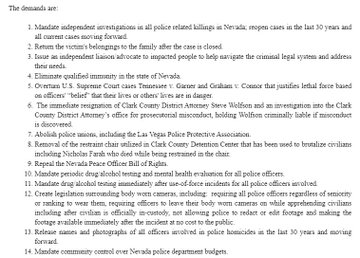 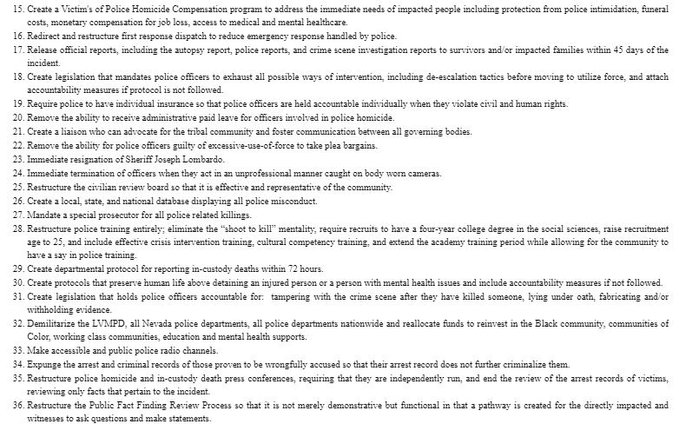 Let us go over the points, shall we? It will not be a full fisk of the entire statement but a more honest and less snarky examination of their thirty-six demands.

“Mandate independent investigations in all police related killings in Nevada; reopen cases in the last 30 years and all current cases moving forward.”

If there is anything to suggest that particular case requires revisiting, than give reasons to do so beyond presumptions of institutional racism. But note how in a seemingly neutral and reasonable statement is a rather sweeping presumption of guilt upon the various Sheriffs, District Attorneys, and others of both major political parties. This “demand” isn’t actually about revisiting cases, but tricking people in buying into the presumption.

“Return the victim’s belongings to the family after the case is closed.”

“Issue an independent liaison/advocate to impacted people to help navigate the criminal legal system and address their needs.”

There we go, special treatment. Also noted that “impacted people” is a rather vague term that could mean anything from someone shot by the police to all non-White individuals in the state.

“Eliminate qualified immunity in the state of Nevada.”

Qualified immunity exists for the same reason that “stand your ground laws” and the Castle Doctrine exist: People should not be punished for having to make a split-second decision with their life, and one would reasonably see it, at stake; this is especially so when the officers’ job is to engage, arrest, and even stop with lethal force if necessary suspects on behalf of the government.

What eliminating qualified immunity is make officers less likely to intervene against criminal suspects, even if it means that other people die, since you as an individual have no right to have the police protect you.

“Overturn U.S. Supreme Court cases Tennessee v. Garner and Graham v. Connor that justifies lethal force based on officers’ ‘belief’ that their lives or others’ lives are in danger.”

Beyond the obvious that no state legislature can overturn decisions of the Supreme Court of the United State, justifiable use of self-defense, up to an including the use of lethal force, is well understood (though there are variations amongst the states) the being in reasonable fear or one’s life or another’s life regardless of if you are a police officer or not, is part and parcel of any justification of self-defense involving lethal force.

What this demand does is demand that police officers surrender their rights that other people have. Yet again, this would result in the Ferguson Effect on steroids.

The current D.A. has already released a statement that speaks to the point better than I.

Does this mean we can abolish the Teachers’ Union? This is just another demand (and as you will see, not the last), that wishes to make police officers so vulnerable to “lawfare” as to practically empower criminals to commit crimes at will.

“Removal of the restraint chair utilized in Clark County Detention Center that has been used to brutalize civilians including Nicholas Farah who died while being restrained in the chair.”

How else would the police restrain someone who needs to be restrained? If there is a better way, then suggest it rather than push a demand that clearly presumes that no prisoner or suspect could ever be a danger to themselves or others while in custody.

Removing legal protections against police officers will do in practice what “defund the police” and even “abolish the police” would do under the guise of “community reform”.

Can we do that same for teachers, suspects, or any convicted criminal?

“Create legislation surrounding body worn cameras, including: requiring all police officers regardless of seniority or ranking to wear them, requiring officers to leave their body worn cameras on while apprehending civilians including after civilian is officially in-custody, not allowing police to redact or edit footage and making the footage available immediately after the incident at no cost to the public.”

Oh, that will only end up helping the police in the end.

“Release names and photographs of all officers involved in police homicides in the last 30 years and moving forward.”

So now the demands include doxxing police officers.

There we go again with that “impacted people” reference, along with the assumption of special status.   If you want compensation, you should be treated no differently than anyone else who is seeking compensation from the state.

“Release official reports, including the autopsy report, police reports, and crime scene investigation reports to survivors and/or impacted families within 45 days of the incident.”

This should be treated no differently than reports, et al., from any other department, branch, or part of the government.

“Create legislation that mandates police officers to exhaust all possible ways of intervention, including de-escalation tactics before moving to utilize force, and attach accountability measures if protocol is not followed.”

Police have to act in split-second decisions, and taking away their option to defend themselves if necessary is the same as eliminating “stand your ground” for someone whose job on behalf of the government is to insert themselves into potentially dangerous situation.

“Require police to have individual insurance so that police officers are held accountable individually when they violate civil and human rights.”

This, again, is attempting to punish police for doing their job and would result in police just not inserting themselves into potentially dangerous situation.

This would punish innocent police financially, which again would encourage them to not intervene to stop criminals or protect people therefrom. As Mick Jagger sang, this would presume that “all the cops are criminals; all the sinners saints”.

“Create a liaison who can advocate for the tribal community and foster communication between all governing bodies.”

“Remove the ability for police officers guilty of excessive-use-of-force to take plea bargains.”

Would this be extended to people who attack and murder police?

The Sheriff can speak for himself.

“Immediate termination of officers when they act in an unprofessional manner caught on body worn cameras.”

Who decides what is “unprofessional”? Would this be applied to anyone else working for the government?

“Restructure the civilian review board so that it is effective and representative of the community.”

This is simply a declaration that the “correct” people (such as self-declared “community organizers” perhaps) ought to be in control who represent what “the community” is supposed to be and not actually reflective of the actual community, like putting #CHAZ in control of the police, perhaps.

Will the same be done for other government workers, such as teachers and social workers? Will such a database also include the misconduct of criminals? Would “police misconduct” be that ill-defined “unprofessional” actions?

“Mandate a special prosecutor for all police related killings.”

Who decides who this special prosecutor is?

“Restructure police training entirely; eliminate the “shoot to kill” mentality, require recruits to have a four-year college degree in the social sciences, raise recruitment age to 25, and include effective crisis intervention training, cultural competency training, and extend the academy training period while allowing for the community to have a say in police training.”

A lot to unpack here.

This isn’t the movies.   If you need to shoot it is because you are in reasonable fear of your, or someone else’s, life. You don’t shoot to would. This is basically no different than completely disarming the police.

The requirement that police have a degree in “social sciences” is a naked attempt to make the police force more indoctrinated with college Leftist ideolgy, as is the “cultural competency training”.

Another innocuous, or innocuous sounding proposal to distract from the aforementioned extremism.

“Create protocols that preserve human life above detaining an injured person or a person with mental health issues and include accountability measures if not followed.”

In other words, if a person is dangerous, they are to be let go. This is objectively pro-criminal.

“Create legislation that holds police officers accountable for: tampering with the crime scene after they have killed someone, lying under oath, fabricating and/or withholding evidence.”

I’m pretty sure that doing these things is already illegal.

Along with effectivly, or literally, dis-arming the police, they must be made completely helpless so that the money can be redirected to where, presumably the self-declared “community leaders” want.

This would not only prevent the police from being able to respond to an organized riot of Antifa-style uprising or attempt to create an “autonomous zone”, but would allow such groups to ambush the disarmed (effectively or literally) police.

“Expunge the arrest and criminal records of those proven to be wrongfully accused so that their arrest record does not further criminalize them.”

Only if it applied to everyone including police accused of misconduct but found innocent.

“Restructure police homicide and in-custody death press conferences, requiring that they are independently run, and end the review of the arrest records of victims, reviewing only facts that pertain to the incident.”

And just who would “independently run” these press conferences? And would not hiding the criminal actions of someone shot by the police just further the narrative that all police shootings are proof of police being fascist thugs?

“Restructure the Public Fact Finding Review Process so that it is not merely demonstrative but functional in that a pathway is created for the directly impacted and witnesses to ask questions and make statements.”

They already have examples found in the anti-male Star Chambers of colleges and universities.

So, as we can seen vaguely and innocuous sounding requests are used to hide more extreme demands, which are nonetheless sneakily worded to sound as innocuous as possible.

This is not to say that there ought not be reforms or changes, but only that these “demands” are not he way to do it.

The threat to public safety will come not from those who openly say they want to “defund the police”, but by those who come across as “reasonable” who want to do the same and actually be able to achieve it; this is the foundational playbook of the transformative Left.

One Response to Concerning The “Forced Trajectory Project”