The Irrational Animus of Biological Reality

There are two ways to receive citizenship at birth: via the 14th Amendment and the Common Law precept of jus soli; or via statute (primarily limited to jus sanguinis, though also under some circumstances to non-genetic biological relationships).

This law applies equally to everyone, regardless of whether they are straight or gay.

Of course, certain assumptions that can be made for marriages between a man and a woman, such the presumption that the husband is the father of the wife’s child, can not made between same-sex couples who are legally wed to each other because granting that assumption would require that we presume the biologically impossible. Thus, a child born to someone in a same-sex marriage could never be born within the wedlock of the legally wed couple. 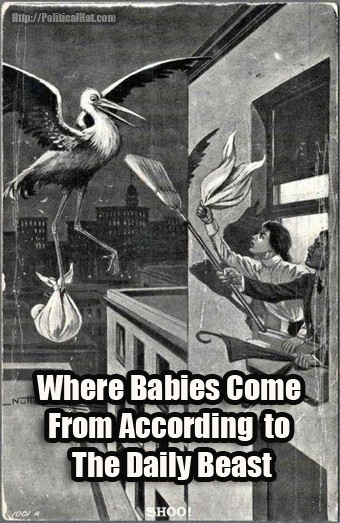 When the Supreme Court overturned prohibitions on “same sex marriage”, it was declared that same-sex and opposite-sex marriages are equivalent and that any potential inequivalencies were just “irrational animus”.

Mother nature is clearly, then, an irrational hate-filled b***h.

That citizenship, by statute, generally grants citizenship by birth to natural (i.e. genetic) parents (and non-genetic children carried by a surrogate U.S. National mother, in some cases), seems to fly above the head of a writer at The Daily Beast. Even the headline (“Trump Administration to LGBT Couples: Your ‘Out of Wedlock’ Kids Aren’t Citizens”) and chaser (“Children of U.S. citizens are falling victim to a policy that de-recognizes their parents’ marriage—and strips them of their birthright citizenship.”) are fundamentally dishonest or written out of ignorance.

In all the examples provided, there is no indication that the same rules would not apply to opposite-sex couples in the same actual situation, or to single individuals. There is no “de-recogniz[ing]” of any legal marriage.

The first example is of two men legally marriage to each other who went to Canada and used a surrogate and an egg donor to conceive a child. It was not explicitly stated that either of the men’s sperm was used, but for the sake of argument such assumption is granted. In an identical situation, a man and a woman, who claim parentage of a child born of a foreign surrogate with an extra-marital egg donor, would be in a similar situation. The child would be born out of wedlock and in accordance with the law—8 USC 1409(a)—the father would need to demonstrate a blood relationship. This is the same exact situation as with the two men aforementioned.

Oh, one might muse, an opposite sex couple could just not mention the child was born through surrogacy using an extra-marital egg donor, and their parentage would be assumed, and that it is “irrational animus” that stops same-sex parents from doing the same. Of course, one would then have to irrationally assume with animus the biologically impossible. That opposite sex couples could more easily get way with it is a function of basic biological possibility.

Does this difference is presumption, limited by biological reality, treat the two couples differently? Yes, because different things are different, and no matter how much five people on the Supreme Court screech that this is irrational animus, unequal things will still be unequal.

But aren’t they still the parent’s child? It depends on the definition. The Immigration and Nationality Act (INA) differentiates between a child as it applies to “visa petitions, issuance of visas, and similar issues”, such as would be the case of a stepchild, and a child who is the “genetic, legitimated, or adopted son or daughter of a U.S. citizen”. In the aforementioned case, there was neither a legitimating (meaning “placing a child born out of wedlock in the same legal position as a child born in wedlock”) or adoption of the child.

This is all further complicated by parentage on birth certificates ceasing to state a child’s biological parents, and rather just the legal parents, regardless of the plausibility of presumption of biological parentage. This just underscores how, unless one wants to force all men to prove blood relationship as if the birth was outside of wedlock—thus eliminating the presumption of paternity (which was always one of the, if not the most important, reason marriage even came to exist)—opposite-sex and same-sex couples must be treated differently if biological reality isn’t to be flouted.

Again, this applies regardless of the sex of one’s legal spouse.

An odd “example” is the case of two U.S. military officers. One of the officers became pregnant via Assisted Reproductive Technology (ART), which places the situation differently than if she had gotten knocked up by man due to the fact that with ART, it can not be assumed that the child is genetically the child of the woman who carries said child to term. ART was not really a consideration when the INA was passed or amended, and many of the legal problems are general and applicable beyond lesbians in legal wedlock. Of course, unlike with the previous example, 8 USC 1409(c) provides for citizenship of a child of an American mother automatically, meaning that the officer who had the child could have gotten away with it if the use of ART was not disclosed, similar to if a single woman or woman married to a man who wasn’t the genetic father; further, if the mother was recognized as the child’s legal parent by the relevant jurisdiction, genetic relationship would be irrelevant.

The third case is an obvious one. An American was legally wed to a foreigner who gave birth using her own eggs. Since the American woman was not the child’s natural parent, due to the biological impossibility of her being so. Sans ligitimation or adoption, the child would have to go through the same naturalization procedure as the biological mother.

Perhaps it is a Catch 22 that a person can not be adopted or ligitimized by a non-natural­­ parent if they are listed on a foreign birth certificate as a parent, but that is a situation that can be addressed legislatively by Congress—such as declaring a child to be automatically adopted by the American citizen if the child is the natural child of the legal spouse of said American citizen—without denying the biological reality that natural parentage can be assumed for opposite-sex couples in a way that is literally impossible to ever apply to two men, or to two women if ART is used.