The following post was delivered by a guy, in a fake looking human mask, who was chanting about a bomb or something… 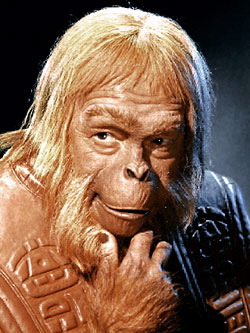 While some apes, such as Drs. Cornelius and Zira, consider humans to be equal of apes, those scientist who understand the absolute truth of the holy scrolls know better. Even if humans were taught tricks such as speaking to writing pseudo-scientific drivel, any truth they espouse will invariably fall short of the full truth.

An example of can be seen by one of an infinite number humans banging away on an infinite number of keyboards, Eileen Crist, who, while noting the ridiculousness of “human supremacy“, nonetheless fails to grasp the subservience of humans and all nature to the highest evolved on this planet, namely, we apes.

This Eileen Crist creature notes a laughible sense of human superiority that most humans, such as Bright Eyes, seem to have, namely that this “worldview esteems the human as a distinguished entity that is superior to all other life forms and is entitled to use them and the places they live. The belief system of superiority and entitlement—or human supremacy—manifests in a range of anthropocentric commonplace assumptions.”

Indeed, the need for humans to take the course of “scaling down and pulling back” is an obvious one, but a course that needs to be forced into them by their evolutionary superiors. This Eileen Crist creature further notes the obvious that humans are an ecological menace. As I have previously noted:

“Man is a nuisance. He eats up his food supply in the forest, then migrates to our green belts and ravages our crops. The sooner he is exterminated, the better. It’s a question of simian survival.”

The idea of “human supremacy” is laughable, but leave it to a human such as this “Eileen Crist” to fail to see the self-evident (to an evolved creature) truth that the only logical way of things is “ape supremacy”.

A little mood music to go along with that…