The decline and fall of Academia, particularly as it pertains to the humanities, has been well documented. The willingness to publish incomprehensible garbage replete with buzzwords has also been established. The true depths to which academia and peer reviewed journals have sunk have now been reveled by the Grievance Studies affair (i.e. Sokal Squared). 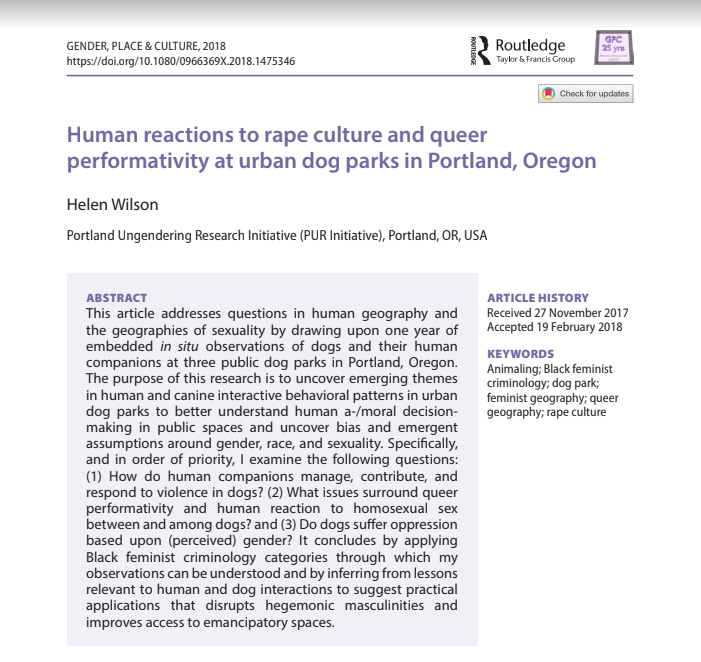 “What if we write a paper saying we should train men like we do dogs—to prevent rape culture? Hence came the ‘Dog Park’ paper. What if we write a paper claiming that when a guy privately masturbates while thinking about a woman (without her consent—in fact, without her ever finding out about it) that he’s committing sexual violence against her? That gave us the ‘Masturbation’ paper. What if we argue that the reason superintelligent AI is potentially dangerous is because it is being programmed to be masculinist and imperialist using Mary Shelley’s Frankenstein and Lacanian psychoanalysis? That’s our ‘Feminist AI’ paper. What if we argued that ‘a fat body is a legitimately built body’ as a foundation for introducing a category for fat bodybuilding into the sport of professional bodybuilding? You can read how that went in Fat Studies.

“We used other methods too, like, ‘I wonder if that “progressive stack” in the news could be written into a paper that says white males in college shouldn’t be allowed to speak in class (or have their emails answered by the instructor), and, for good measure, be asked to sit in the floor in chains so they can “experience reparations.”‘ That was our ‘Progressive Stack’ paper. The answer seems to be yes, and feminist philosophy titan Hypatia has been surprisingly warm to it. Another tough one for us was, ‘I wonder if they’d publish a feminist rewrite of a chapter from Adolf Hitler’s Mein Kampf.’ The answer to that question also turns out to be ‘yes,’ given that the feminist social work journal Affilia has just accepted it. As we progressed, we started to realize that just about anything can be made to work, so long as it falls within the moral orthodoxy and demonstrates understanding of the existing literature.

“Put another way, we now have good reasons to believe that if we just appropriate the existing literature in the right ways—and there always seems to be a citation or vein of literature that makes it possible—we can say almost any politically fashionable thing we want. The underlying questions in every single case were the same: What do we need to write, and what do we need to cite (all of our citations are real, by the way) to get this academic madness published as high ‘scholarship’?”

What this all demonstrates is that academia and the peer review process are fundamentally broken. Insane rantings are accepted as woke “ways of knowing” when they are worded with all the proper lingo and presented in such terms, and with such references, as to cloak it in a skinsuit of academic rigor. In effect, academia and peer reviewed journals have become echo chambers where actual truth is considered axiomatically to be evil and denial of that “evil” to be a paragon of truth and a superior “way of knowing”.

“Underlying these alleged ‘social constructions’ is the most deeply concerning of them all. This is the belief that in urgent need of ‘disrupting’ is the simple truth that science itself—along with our best methods of data-gathering, statistical analysis, hypothesis testing, falsifying, and replicating results—is generally a better way of determining information about the objective reality of any observable phenomenon than are non-scientific, traditional, cultural, religious, ideological, or magical approaches. That is, for grievance studies scholars, science itself and the scientific method are deeply problematic, if not outright racist and sexist, and need to be remade to forward grievance-based identitarian politics over the impartial pursuit of truth. These same issues are also extended to the ‘Western’ philosophical tradition which they find problematic because it favors reason to emotion, rigor to solipsism, and logic to revelation.

“As a result, radical constructivists tend to believe science and reason must be dismantled to let ‘other ways of knowing’ have equal validation as knowledge-producing enterprises. These, depending on the branch of ‘theory’ being invoked, are allegedly owned by women and racial, cultural, religious, and sexual minorities. Not only that, they are deemed inaccessible to more privileged castes of people, like white heterosexual men. They justify this regressive thinking by appealing to their alternative epistemology, called ‘standpoint theory.’ This results in an epistemological and moral relativism which, for political reasons, promotes ways of knowing that are antithetical to science and ethics which are antithetical to universal liberalism.

“Radical constructivism is thus a dangerous idea that has become authoritative. It forwards the idea that we must, on moral grounds, largely reject the belief that access to objective truth exists (scientific objectivity) and can be discovered, in principle, by any entity capable of doing the work, or more specifically by humans of any race, gender, or sexuality (scientific universality) via empirical testing (scientific empiricism). (This particular belief is sometimes referred to as ‘radical skepticism,’ although philosophers also have other meanings for this term.) Although knowledge is always provisional and open to revision, there are better and worse ways to get closer to it, and the scientific method is the best we have found. By contrast, the means offered by critical theory are demonstrably and fatally flawed. Particularly, this approach rejects scientific universality and objectivity and insists, on moral grounds, that we must largely accept the notion of multiple, identity-based ‘truths,’ such as a putative ‘feminist glaciology.’ Under critical constructivism, this gains an explicitly radical political motivation.”

The response has been savage on the grievance studies, which have devolved into a perpetual example of Poe’s Law.

The three involved in duping the peer reviewed journals and exposing the bias in academia are in fact liberals who believe in many Leftist causes, but retain a sensibility for and respect of actual academic rigor and open-mindedness. They were also the three who highlighted why these journals reject rationality and rigor while accepting any insanity that validates preconceived notions: Intersectionality and the Grievance Studies themselves are an evil cult:

The full list of hoax papers, reviews, &c. can be found here.

A project summary and fact sheet is mirrored below.

Project Summary and Fact Sheet by ThePoliticalHat on Scribd

One Response to The Grievance Studies Affair