Press Nothing For English

If there is one thing that the U.K. powers that be have made clear, it is that they despise, more than anything, the British peoples. In the not-too-distant future, if you call 999 (U.K. equivalent of America’s 911) and speak English, the police might not bother to ever show up.

“Victims of crime who do not speak English could be given priority by the Metropolitan Police, a senior officer has suggested.

“Deputy Commissioner Craig Mackey said that callers might be denied a personal visit from police unless they are deemed to be sufficiently ‘vulnerable’.

“He said it is ‘absolutely feasible’ that ‘face-to-face’ visits by officers could be reserved for the ‘vulnerable’ – giving examples as those for whom English is not a first language, the elderly and people with learning difficulties.” 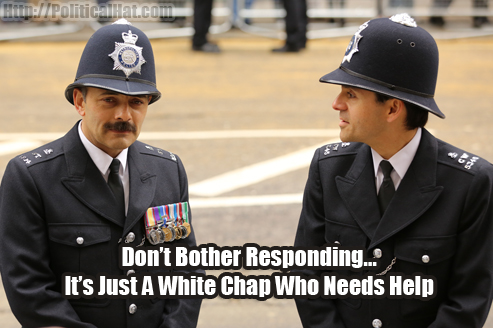 Some… are more equal than others.

“Animal Farm” was not meant to be a how-to manual.

One Response to Press Nothing For English