Of course, the Progressive Left find mathematics to be #Problematic. Unless Progressive “ethics” and “philosophy” are intimately intertwined with the teaching of mathematics, mathematics per se causes “collateral damage” according to a chapter from the textbook “Philosophy of Mathematics Education Today”. The abstract states: 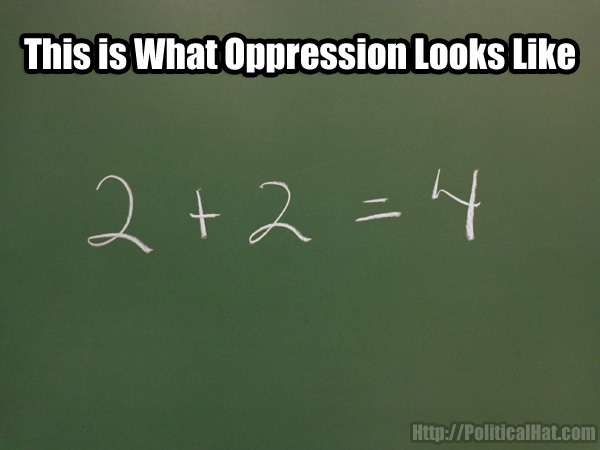 Mathematics is a tool of the Capitalist oppressors!

“Money and thus mathematics is the tool for the distribution of wealth, […] It can therefore be argued that as the key underpinning conceptual tool mathematics is implicated in the global disparities in wealth.”

Mathematics is a tool of the Patriarcy™ and White Supremacy!

Mathematics is objective, logical, and rational. While it may be used as a tool of evil or of good, it is still just a tool of understanding and the language we use to understand, as much as is possible, objective phenomena and processes. That ethics and philosophy exist so that we can apply moral restraints on any tool, does not mean that the tool per se is #Problematic in anyway whatsoever. Mathematics, per se, does not and can not cause “collateral damage”. Sometimes an equation is just an equation, and not merely the means of oppression or liberation.

This entry was posted in Education, Progressives and tagged Communism, Higher Ed, Social Justice, War on Women. Bookmark the permalink.

7 Responses to Mathematics as Oppression