The Privilege of Paying for Your Own Indoctrination

Mandatory “diversity” training and “social justice” workshops are common on college campuses, and increasingly in the real world. However, not only being forced against one’s wishes to be subjected to this brainwashing insanity, but also being forced to pay for that privilege is yet a further turn of the screw, as is the case at a “Multicultural Self-Awareness Workshop” that all Michigan State University Extension employees will be required to attend and pony up $75 to attend. 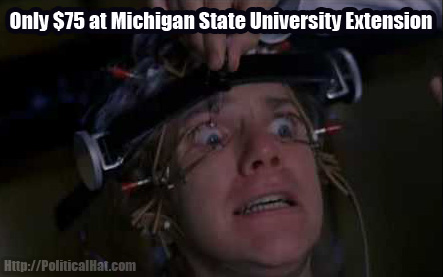 “All MSU Extension employees regardless of funding source or appointment are expected to attend this ‘cornerstone’ multicultural workshop which sets an organizational framework for recognizing, understanding and appreciating differences.

“During this two-day Multicultural Self-Awareness Workshop, participants will explore ways in which to view interactions with people different from themselves. The emphasis is on differences rather than similarities. The workshop focuses on the individual and helps explore belief systems about multiculturalism to identify feelings and values from a multicultural perspective. This intensive learning experience focuses on increasing awareness of several areas of prejudice, discrimination and oppression, including racism, sexism, classism, heterosexism and ableism. Participants are encouraged to reflect on how they’ve learned to think about human differences and on the widespread tendency to view differences within a monocultural view of ‘better than/less than’ thinking. In addition, participants have opportunities to apply what they’re learning to work-related scenarios and explore alternative, more helpful behaviors.”

This is the academic equivalent of making a condemned man pay for the rope with which he is hanged, and with far less dignity.

2 Responses to The Privilege of Paying for Your Own Indoctrination