The British Labour Party has parliamentary shortlists reserved for non-Whites and for “women”. And by “women” they mean anyone who decides to identify as a woman regardless of legal recognition or pretty much anything other than their own self-definition. A self-declared party time “woman”, David Lewis, has decided to take advantage of this:

“I self-identify as a woman on Wednesdays, between 6.50am when my alarm goes off and around midnight when I go to bed.

“My womanness is expressed by my saying ‘I self identify as a woman’ now and again on Wednesdays. I make no changes in my behaviour or my appearance. I keep my name, David and my male pronouns. I wear the same sort of clothes I wear the rest of the week. I keep my beard. I enjoy the full womanness of my beard.” 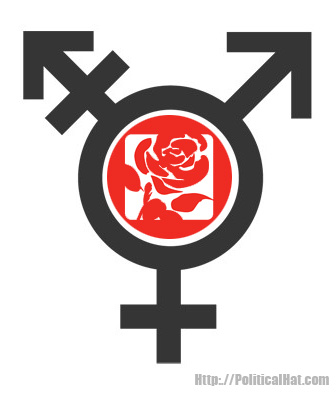 Needless to say, that after initially being allowed to run on a women-only Parliamentary short-list, he was suspended from the Labour party for following the rules and pointing out the natural result of Labour’s Transgender policy, with Labour making an official statement:

“Anyone attempting to breach Labour Party rules and subvert the intention of All Women Shortlists, women’s officers or minimum quotas for women will be dealt with via our established safeguards, selection procedures and disciplinary measures.”

David Lewis didn’t subvert the intention of the rules, he adhered to it and simply highlighted the insanity of the intention.

And insane it is.

This entry was posted in Elections, Progressives and tagged Europe, Gender, Lulz, Social Justice, War on Women. Bookmark the permalink.