Under the guise of making room for more books, the libraries of Swedish municipality of Botkyrka have purged themselves of politically incorrect older editions of the Pippi Longstocking book “Pippi in the South Sea”. Specifically because:

“The new edition of the children’s book doesn’t feature the phrase ‘king of the Negroes’ or ‘Negro King’, which was used in the original in reference to Pippi’s father. The new book substitutes the phrase with ‘king of the South Seas’ or ‘South Sea king.'” 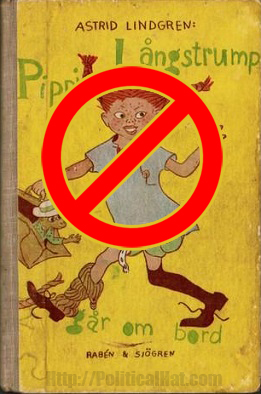 If a certain word is offensive, or a story line has negative racial overtones, then use it as an opportunity to enlighten and teach, not as an excuse to censor and distort.

At the very least, keep the book with parental consent required.

The library claims that the books were not literally burned, but readily admit that they are trashed or recycled. Is oh-so-Socially Just Sweden, of course, they wouldn’t dream of burning books—that would result in CO2 being added to the atmosphere—so of course they dispose of the books properly, especially through environmentally and tree-friendly recycling!

The memory hole has never been so woke or so “green”.

This entry was posted in Progressives and tagged censorship, Europe, Social Justice. Bookmark the permalink.