The character of the Doctor from the British Science Fiction series “Doctor Who” is an iconic one. One of the more interesting aspects of this character is that the Doctor isn’t just limited to one pigeonholed interpretation. Beginning fifty years ago, the actor was replaced with another one with the in-show explanation that the Doctor, as a Time Lord, can regenerate his body. This allows many different aspects of the character to be seen, but even then there is, or at least ought to be, a unifying aspect. The Doctor was always a grandfatherly, or at least a paternal or older brother, character; and even when they introduced romantic aspects it always came across as more protective and platonic than sexual (slash fiction and Tumblrina shipping aside). Now, the BBC, in all of its wonderful wokeness, has decided that the next person to play the Doctor in Doctor Who will be a woman:

“British actress Jodie Whittaker was announced Sunday as the next star of the long-running science fiction series ‘Doctor Who’ — the first woman to take a role that has been played by a dozen men over six decades.

“Whittaker, best known for playing the mother of a murdered boy in detective drama ‘Broadchurch,’ will replace Scottish actor Peter Capaldi at the end of the year, the BBC said.

“Whittaker is the 13th official incarnation of the Doctor, a galaxy-hopping Time Lord from the planet Gallifrey who travels in the Tardis, a time machine shaped like an old-fashioned British police telephone booth.”

Aside from the fact that this numbering as the (unlucky?) 13th Doctor excluded counting the War Doctor and also other in-cannon aspects (The Watcher, The Valeyard, &c.), it isn’t out of cannon at this point for a Time Lord (or Time Lady) to take on any aspect they wish. For example, Romana almost chose to regenerate in a rather non-human body during the run of Tom Baker as the Doctor.

This, perhaps, is why having a female Doctor is not, per se, necessarily a bad thing. However, considering the previous time they regenerated a male Time Lord into a female Time Lady, The Master, the writers eventually turned this new female Master into… a good and decent companion of the Doctor—completely ruining character—prospects for a decent show with Jodie Whittaker in the lead role is a slim one.

To make it clear, Whittaker can’t ruin Doctor Who because the show’s writers (and choices for horrible companions) have already done that.

Take, for example, an episode from this past season involved the Doctor with a bisexual female companion with masculine name going back to the Victorian era and whining about how it was all oppressive despite including the BBC’s apparent minimum quote for non-White actors in roles that no one aside from the villain, who was straight White cis-gendered male that spouted how non-Whites were inferior and was literally using poor people as fuel before being gleefully killed off, treated any differently because of their race.

Doctor Who has degenerated into a woke social justice morality play.

Unsurprisingly, Doctor Who is the perfect vehicle to corrupt to push the transgender myth that a man can really become a woman, or a woman a man, even on a biological level of changing one’s biological sex to conform with their fantasy! After all, when the regenerates, the Doctor becomes a new man, or now a new woman, complete with all biological indications. The Doctor is an alien (half-alien if you accept the 8th Doctor’s TV movie and the Big Finish radio dramas), and his regeneration is science fiction, just like a “trans-woman” being no different than a biological woman is even more fantastical science fiction. 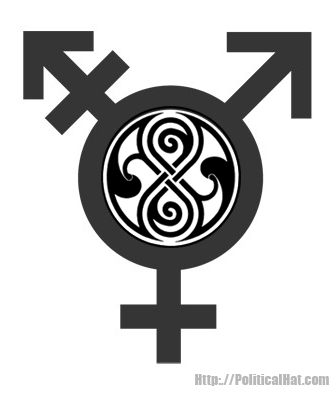 This is not some brave choice by the BBC. A brave choice would have been to higher yet another White male. However, a writer for Doctor Who came right out and declared that Doctor Who has always existed to be woke and socially just and stuff:

The BBC has been hell bent on purging those icky White “cis-het” males from writing positions, in the name of celebrating “diversity” to the point of actually refusing to even consider applicants because they are White. That’s correct, the BBC actively engages in racial discrimination and exclusion in the name of “diversity”.

It is surprising, then, that they didn’t go full “Social Justice Warrior” and cast a queer otherkin midget person of color with autism who is both trans-disabled and “neuro-queer” with autism, complete with a furry costume as a new outfit!

This entry was posted in Progressives and tagged Europe, FAIL, Gender, Social Justice. Bookmark the permalink.

4 Responses to Transgendering of Time Lords