Venezuela Turning in a Widening Gyre 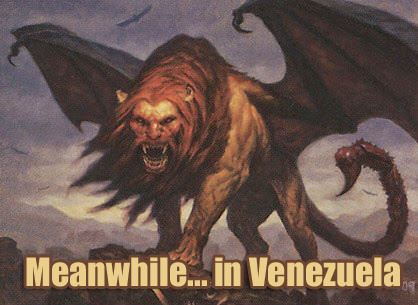 Much like the proverbial falcon no longer hearing the call of the falconer, Venezuela has ceased to be able to hear the call of sanity and rationality. In other words, in Venezuela, things are falling apart, the center does not hold, and merest anarchy has loosed upon Venezuelans’ world.

The second coming of promised prosperity—now long forgotten—arising from the nationalization of other people’s property by the proletarian Spiritus Mundi gazing blankly and pitilessly as the darkness of poverty—now that they have run out of other people’s money—drops down while the indignant reel of what few brave protesters remain behind their barricades cast their shadow.

Venezuela—a second coming… but of what?

One Response to Venezuela Turning in a Widening Gyre