With the so-called “Antifa” and the increased exposure of the Black Bloc caused by the insane anarcho-syndicalist Left (and their fellow-goers), the allegedly “heroic” little thugs have been increasingly openly rambling about their incoherent pseudo-philosophy. 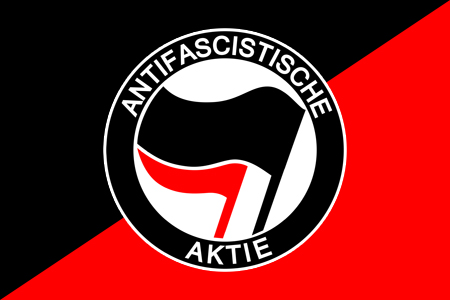 Herein follows a fisking of Lawrence’s rant in the Daily Californian.

“There’s a petition circulating that would have me declared a domestic terrorist.”

That’s because you are a domestic terrorist.

And a bad person

“On the afternoon of Feb. 1, a few friends and I met up with many other small groups of friends. We gathered off campus, distributed flags, wrote the National Lawyers Guild number on each others’ arms and helped each other make sure our faces were properly covered. Then we started marching.

“If you were in the crowd on Sproul Plaza that night, the antifa might have appeared to be a homogenous mass of agents of chaos descending on your ‘resistance dance party.’ This is understandable. Black bloc tactics are primarily designed to protect the identities of the individuals in the bloc from doxxing, surveillance footage and being singled out for arrest. You couldn’t tell who was behind those masks, and that’s the point.”

So, you admit that with a forethought of malice to engage in criminal activity, and to hide your identity with the clear aim of getting away with our crime. That’s same logic of Klansmen burning a cross on someone’s lawn, except with even more violence and chaos.

“But don’t get it twisted. We were not, as the news, the chancellor and concerned progressives have alleged, ‘unaffiliated white anarchists.’ Behind those bandanas and black T-shirts were the faces of your fellow UC Berkeley and Berkeley City College students, of women, of people of color, of queer and trans people.”

But you are anarchists. Specifically anarcho-syndicalists. The flags were a dead giveaway. And yes, even beneath the masks it was evident that many, many of you were pasty White people.

Spoiled and whiney rich kids who attend one of the highest regarded public universities in America, reserved for the few?

“Now, personally, I prefer to attend protests in cocktail dresses and eyeliner. But after the reception of my last piece, that wasn’t an option.

“Though the worst a Breitbart ‘reporter’ could muster was misgendering me, trending on Breitbart is not an experience I can recommend. I received many colorful threats to my life, but no credible ones. Others who tango with Milo Yiannopoulos’ fans haven’t been so lucky.

“So when I went out to make good on my promise to revoke Yiannopoulos’ gay card, I wore black and covered my face.”

All black? How gauche.

“To those who defend free speech: I spent a semester in this very newspaper yelling about Grindr hookups and advocating rioting. My constitutional right to be outrageous and offensive in the press is very precious to me. But when I exercised my freedom of speech and called Yiannopoulos a pathetic motherfucker with ugly roots, many liberals told me I should be quiet and ignore him, and all his fans told me they were going to kill me. I expect this will happen again.

“Unlike Yiannopoulos and his friends, I don’t harass people for being trans or Muslim or undocumented. I don’t doxx people for disagreeing with me. I also don’t have police on call to shoot tear gas and rubber bullets at people who think I shouldn’t talk. But go on, tell me that I killed the Free Speech Movement.”

O.K.  You killed the Free Speech Movement by silencing dissenters through naked violence. You’ve embraced a Rawlsian concept of claiming to be for “free speech” by simply redefining it to exclude any speech you don’t like.

“To those who hate Yiannopoulos and the alt-right but have a hard time condoning black bloc tactics and property damage, I understand that these tactics are extreme. But when you consider everything that activists already tried — when mass call-ins, faculty and student objections, letter-writing campaigns, numerous op-eds (including mine), union grievances and peaceful demonstrations don’t work, when the nonviolent tactics have been exhausted — what is left?”

How about letting people enjoy their freedom of speech?

“Of all the objections and cancellation requests presented to the administration, local government and local police, the only one that was listened to was the sound of shattering glass.

“To the less radical bystanders who chanted ‘no more violence’ (as though Amazon windows and floodlights have bones to break or blood to spill) and who turned out the next morning to help clean up — would you have been there to defend the undocumented students he would have outed? To defend me from the next round of doxxing and lukewarm death threats that is my reward for exercising my own First Amendment rights? Will you chant No More Violence at the Proud Boys and the skinheads? Will you get between a counter-protester and the target of their rage?”

Milo Yiannopoulos was not inciting people to violence you histrionic drama queen. The only violent ones were you and yours.

“I understand that the chaotic reality of direct action frightened a lot of people. But at the University of Washington protest, a Yiannopoulos fan shot an unarmed anti-fascist organizer and walked free. Do broken windows frighten you more than bullets?”

The man who was shot was a Wobbly and the shooter claimed self-defense.

“Antifa was there to protect UC Berkeley students when the administration was not. Within 15 minutes of the bloc’s arrival on Sproul Plaza, Yiannopoulos was being rushed from the building. These were not acts of violence.

“They were acts of self defense.”

Self defense doesn’t involve starting a riot or attacking innocent people and destroying businesses that employ people in your community.

“And to Yiannopoulos and all your friends who invited you and hosted you and defended your ‘right’ to speak: I recommend you learn your lesson.”

Yes, Milo does have a right to speak. The “lesson” you were trying to teach was clearly “shut up”.

You can start by not being a violent little thug.

As a bonus, here is the “Official Anti-Milo Toolkit”:

One Response to Fisking a Black Bloc Thug