The Cultural Appropriation of Slavery

The combination of ignorance and indoctrination in modern education has but one aim: Delegitimize America and its civic heritage as a unique evil to be overcome. Case in point: The belief that America invented slavery, which was wholly confined within.

The truth of the matter is that slavery was an actual act of “cultural appropriation”. Slavery and the slave trade was widespread in Africa before the arrival of Europeans. Indeed, Europeans originally sailed to sub-Saharan Africa not with the intention of imposing racism, but to simply find trade routes to the Indies that didn’t involve the Arabs as middlemen, the same Arabs that enjoyed centuries long slave trading with not only sub-Saharan Africa, but also the trade in White slaves! 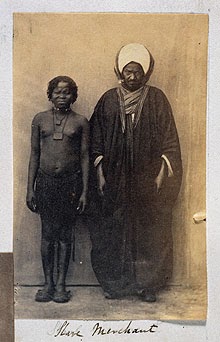 If the West should be condemned for its part in slavery, it should be for its act of cultural appropriation.

This entry was posted in Education, Progressives and tagged derp, Higher Ed, War on Women. Bookmark the permalink.

3 Responses to The Cultural Appropriation of Slavery