Faced with a potential recall election, Venezuela’s President Maduro has decided to make a convincing case… by firing from the civil service anyone who dares not blindly support him:

“In the last few months, Venezuelan politics pretty much has revolved around the opposition’s push for a vote to recall President Nicolas Maduro, which the socialist government has fought vigorously — and with the executive and judicial powers it still controls.

“But the government’s latest effort to stop the referendum is by far the bluntest.

“On Monday, a high-ranking Chavista announced that a big chunk of public employees who are supportive of the vote, and signed a petition for it back in April, will lose their job.

“…[T]he ruling party will provide ministers and public companies a list with all the names.” 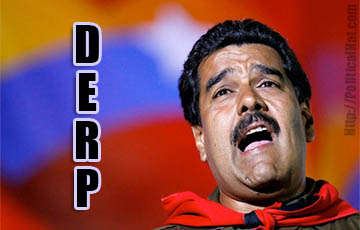 While purging thought criminals is a normal think in the increasingly Leftist corporate culture in the United States, mass firings from the government are something else all together.  Interestingly enough, Venezuela allegedly has protections for dissenting civil servants… kind of…

”In Venezuela there are approximately 3 million public employees, but according to law only those who hold a manager position can be let go without cause.

“Servando Carbone, director of the National Federation of Public Workers, told Fox News Latino that as many as 10,000 people could lose their job this week due to the government’s most recent move.

“Almost half of the public workforce in Venezuela (about 1.2 million people) is made up of temporary employees, who are perceived as more susceptible because their job depends on the renewal of their contract.”

And of course those loyalist bureaucratic minions will be professional and neutral when it comes to serving the populace, right?

If, not there is always the loyal military to take over the important jobs… like rationing food.

Remember when Venezuela was praised as a successful socialist democracy that wasn’t a military police state? Good times… good times…

This entry was posted in Elections, Progressives and tagged Communism, New Feudalism. Bookmark the permalink.

One Response to Dissenters Purged From Venezuelan Civil Service