An opinion piece from the New York Times surprisingly acknowledges the emotional fragility of modern students and their need for validation.  Unsurprisingly, this is used as an excuse to condemn teaching children self-discipline, self-reliance, and a stoic ability to endure.

“Once upon a time, the story line goes, kids were raised in a tough environment. They had to do hard manual chores around the house and they got in fights on the playground. Then they went off to do grueling work in the factory or they learned toughness and grit in the military.

“There’s a lot of truth to that narrative, but let’s not be too nostalgic for the past. A lot of what we take to be the toughness of the past was really just callousness. There was a greater tendency in years gone by to wall off emotions, to put on a thick skin — for some men to be stone-like and uncommunicative and for some women to be brittle, brassy and untouchable.”

The proffered solution?  Fulfill the kiddies’ emotional void with a spiritually fulfilling purpose, or “telos“.

“If you really want people to be tough, make them idealistic for some cause, make them tender for some other person, make them committed to some worldview that puts today’s temporary pain in the context of a larger hope.”

Would you like some grape flavor-aid to go along with that sense of spiritual fulfillment? 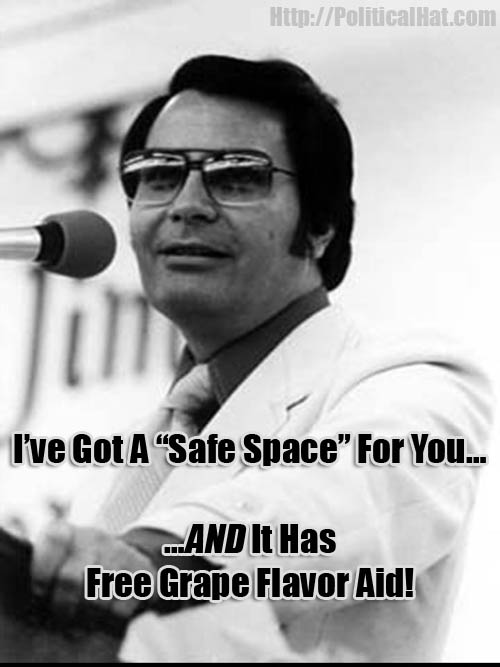 Emotional fragility comes not from lack of spiritually fulfilling purpose, but by reliance thereupon.

If you need someone else to provide you with an emotional and almost spiritually fulfilling reason to live, than you are emotionally fragile, and not in any way, shape, or form strong or a sign or resilience; it is a sign of a hollow life.

One Response to Modern Cult of Telos