It has become the revealed truth of the Left that “Patriarchy,” heterosexuality, or the “gender binary” are inventions of Western Civilization (and thus Whiteness) that was created in order to oppress people to gain unearned “privilege” by “colonizing” the mind of the Noble Savage who apparently all lived in a Matriarchical gender-less queer paradise of communistic heaven. 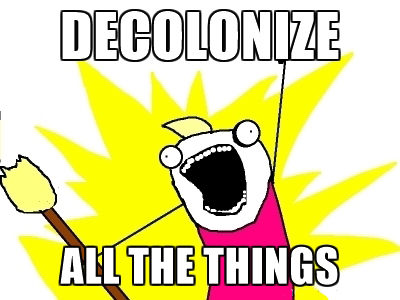 The irony, of course, is that this entire concept and way of thinking was invented by… straight White cis-gendered males:

“White males come up with the thought that all thought is determined by things like whiteness and maleness, deploring along the way how white males have a history of imposing thought structures that enhance their power, and they convince the world that nothing less than History is on the side of their white male thought, and no, that sort of thought coercion is not imposition of a thought structure! Satan couldn’t come up with better legerdemain.”

“But here’s the thing about Marx, Weber, and Foucault. They were lily-white and—how do we put it these days—humans with penises. So are the entire stable of modernist and postmodernist thinkers who have crafted the cosmic architecture that has spawned, to pick a few relevant categories: feminism, LGBT thought, Occupy Wall Street, and Black Lives Matter.”

In effect, the Progressive Left and their fellow goers are projecting their own hypocracy:

“The irony is that the very thought giving life to the accusation of Western colonialism—that dead, white Western males have constructed power structures around the globe that serve only to advance their power—is itself a colonization of black, woman, and LGBT minds by dead, white Western males! I challenge anyone to follow the history of ideas back from a modern leftist movement and not end up in a northern European cesspool of testosterone-permeated whiteness.”

How do they deal with this paradox?

“This goes back to the nagging paradox of the postmodernist epistemology that founds so much of the progressive cosmic architecture: How can thought—which is claimed to be socially determined—itself escape that very determination when it is progressive? A Marx or Weber or Foucault will make claims about the absolute subjectivity of human thought, claiming it’s determined by economics, culture, power, or whatever, while somehow he exempts himself from the forces he claims tyrannize others’ thinking.

“The answer: they think they’ve beat the Liar’s Paradox. The Liar’s Paradox ponders whether you can believe a Cretan who says all Cretans are liars. How do you beat this unbeatable paradox? You do it by transcending the rules of logic to which us plebs are subject. Ultimately it’s a Gnostic position, that a certain select few have been granted a bird’s eye view of the cosmos and can see everything sub species aeternatitas.”

This is, in effect, a religious zealotry:

“Thus Weber can transcend his own culture and recognize the overpowering nature of culture on thought, or Marx can disconnect his theories from the regular rules of economic determinism, or Foucault can scribe language free of his own will to power, or sociology departments can claim the mantle of objective science without any sense of irony.”

In effect the “decolonizers” have themselves been mentally “colonized” by dead White “cis-het” males.

This entry was posted in Progressives and tagged derp, Kyriarchy, Social Justice. Bookmark the permalink.

2 Responses to The Colonizing Decolonizers