Or, how the WorldCon is society and art writ small—”she would know”. 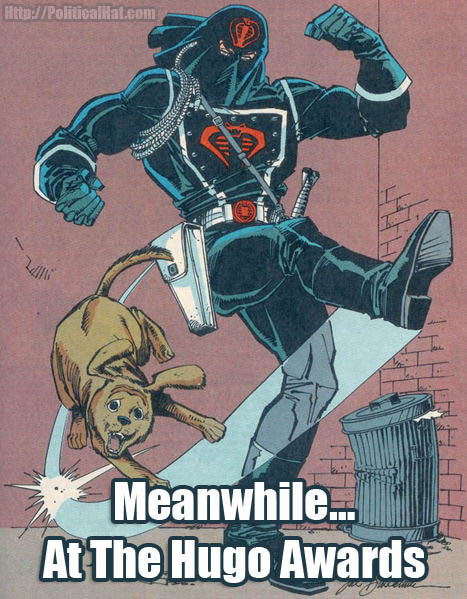 Another WorldCon which hosts the Hugo Awards has come and gone.  Yet again the two “puppies” slates (Sad Puppies and Vox Day’s Rabid Puppies).  And yet again, the old guard of the WorldCon and SMOFs of “fandom” either voted “No Award” or voted for Politically Correct alternatives.

One of the “No Award” votes was for the category of “Best Related Work”.  Multiple entries were about the dark underbelly of “fandom”, specifically the covering up of child molestation and abuse to protect Politically Correct authors.  One of the nominees was “The Story of Moira Greyland” by the daughter of Marion Zimmer Bradley, outlining the molestation she was a victim of by her mother, and of her child molester father, who died in prison after being convicted of molesting an eleven year old boy.

During the awards ceremony, between announcing the title and author, and the announcing of the publisher which was in this case the website “askthebigot.com”, the toastmaster, Pat Cadigan, slipped in the aside “she would know”.*

That moment validated the complaint that the “inner fandom” protects their own, particularly if they were into “alternate sexualities”.  The Hugo Awards have indeed become insular an incestuous in nature.

The award winners were largely predictable.  Unless otherwise clearly supported, the vote was against the puppies and either “No Award” was announced, or there was a rally round the most politically correct alternative.  A bid hubbub was made out of how White males were shut out of the top literary awards (novel, novella, novelette, short story).  In particular, the acceptor of the award for Best Novel read a statement by the author that belittled the puppies and reveled in the brave new world of a glorious science fiction future free from oppressive White males oppressively oppressing hack Politically Incorrect writers.

The other “puppy kicking” speech came from the Best Graphic Story winner Neil Gaiman who celebrated the puppy kicking… despite both Puppy Slates finding his work to be Hugo worthy.

Toastmaster Pat Cadigan* engaged in the classic “DARVO” trick of accusing the accuser:

“DARVO refers to a reaction that perpetrators of wrong doing, particularly sexual offenders, may display in response to being held accountable for their behavior. The perpetrator or offender may Deny the behavior, Attack the individual doing the confronting, and Reverse the roles of Victim and Offender such that the perpetrator assumes the victim role and turns the true victim into an alleged offender. This occurs, for instance, when an actually guilty perpetrator assumes the role of ‘falsely accused’ and attacks the accuser’s credibility or even blames the accuser of being the perpetrator of a false accusation.”

In their little world, they Deny that the Hugo Awards and the “core fandom” have become insular and incestuous with the awards—supporting themselves and the select few authors to the exclusion of more popular works—and then Attack those who called them on it while Reversing the role of Victim and Offender by portraying themselves high priests of Science Fiction and Fantasy defending their hallowed institution from a bunch of wreckers.  The “Sad Puppies” started, not to destroy the Hugo Awards, but to save them by promoting what they believes to be quality works that were outside of the Politically Correct and/or insular fandom vein.  Vox Day’s “Rabid Puppies” were a response to reaction of the WorldCon inner sanctum against the “Sad Puppies”.

Indeed, the Hugo Awards have quickly become a pissing contest between the “old guard” and Vox Day, with the “Sad Puppies” becoming more than a crowdsourcing of recommendations for Hugo worthy works and collating support for various works.

The old guard of the WorldCon and the Hugo Awards portray themselves as defending a wide Science Fiction and Fantasy fandom against a few “wreckers”.  Perhaps the wisdom of James FitzJames Stephen would illuminate the preposterousness of this position:

“[Mills] appears to believe that if men are freed from restraints and put, as far as possible, on an equal footing, they will naturally treat each other as brothers, and work together harmoniously for their common good.  I believe that many men are bad, a vast majority of men indifferent, and many good, and that the great mass of indifferent people sway this way or that according to the circumstances, one of the most important of which is the circumstances is the predominance for the time being of the bad or good.”

Unsurprisingly, the Business Meeting of the WorldCon, where about two hundred people changed the rules for nominations.  The first major change, which will be in effect for the 2017 Hugo Awards, was the “E Pluribus Hugo” (EPH) method of choosing nominees.  Rather than include the top five in nominations in each category, ballots in each category were given a single “point” which was divided up equally for each nomination on a submitters ballot.  Thus, one point if a single nomination is made, half a point for each nomination if there were two nominations, &c.  Thereafter, the nominees with the lowest point totals are moved into an elimination phase where the one with the fewest notifications is eliminated.  The process is repeated until only the top remaining final ballot is finalized.

At the business meeting, advocates for EPH were very open about this change being made solely to kick out the puppies.  To be fair, there was a significant minority of the meeting that, while also speaking out against the puppies, were reluctant to change the voting system because it would also affect non-puppy nominees, such as a Hugo Award winner who would have been purged from the final nomination list if EPH had been in effect.  This could, if played correctly—and if the number of Puppy voters increased enough—result in a flip situation from the present, where one Puppy nomination is made per category, and ends up winning because the increase in Puppy (or at least not Puppy-adverse) voters voted for the Puppy nominee.  This is not far-fetched, and a number of people at the Hugo Awards mentioned never having even heard of the winner of “Best Novel” and had no idea who voted for it. The final nomination ballot for the past three WorldCons (including 2016) were compared under the old system and under EPH. Interestingly enough, the results can not be independently validated because it would require access to the raw data, which is not released.  Because EPH did not exclude all puppies, further changes were proposed, which if approved at the 2017 WorldCon in Helsinki, would be in effect for the 2018 WorldCon in San Jose, California.  Further major changes were: “Three Stage Voting” (3SV) and the EPH+.  In the case of the 3SV system, the top fifteen finalists would be subject to a “reject” phase where any work, regardless of how many nominations or “points” it received could be reject if: 1). The work receives 60% reject vote amongst the total of “accept” and “rejects” votes (abstentions are allowed); and 2). the number of “reject” ballots is the higher of 600 or 20% of all eligible  voters.  This was proposed because those with the inside skinny on the numbers said that there were less than four hundred full puppy slate voters while the total number of votes was “an order of magnitude” higher.  Thus, the non-Puppy voters could kill off the Puppy nominees, even if they received both the highest number nominations and the highest number of “points”, while the Puppies could not do the same… assuming that the Puppies don’t “zerg rush” the nomination process.  The EPH+ would change the dividing up the “point” by assigning for each successive nomination in a single catagory an increasingly smaller share of the “point” (e.g. “1 point for 1 remaining nomineed, 1/3 of a point each for 2 remaining nominees, 1/5 of a point each for each 3 remaining nominees, &c.).  In all three cases (EPH, 3SV, and EPH+), the proposals will have to be approved at each WorldCon meeting up until and including the 2022 WorldCon, with each WorldCon before that being allowed to vote to suspend these changes for the next Worldcon.  Considering that the business meeting only had about two hundred people present, it would only take a few hundred Puppies going to the Business Meeting at just one of the next half-dozen WorldCons to kill off any of these proposals.

There were two other changes of note.  Previously a nominee required at least 5% of the nominations to be on the final ballot; this has been repealed effective the 2017 WorldCon.  Additionally, a proposal for a new category, “Best Series”, will be up for ratification at the 2017 WorldCon.  The most extreme proposal, which would allow the WorldCon committee to add two nominees to the final ballot, even if the new nominees had receive no nominations, was not voted upon.

The spread of “Social Justice” at the WorldCon is not limited to the Hugo Awards.  Many panels included panelists making Donald Trump jokes, even when the panel had nothing to do with anything even remotely connected to Donald Trump.  Many of the panels, further, were explicitly about celebrating “Social Justice” and the sidelining of straight “cit-het” White males.

For example, a panel about “S[cience]F[iction] as Protest Literature” included a panelist who proudly declared himself a Social Justice Warrior who loves “Safe Spaces” and is studying “Critical Analysis”, an outspokedn anti-Capitalist, and an association of “right wing” protest literature with the Turner Diaries.  “Dick and Jane” was declared to have a political agenda, presumably because it involved White children who represented the dreaded “gender binary”.  One panelist, Jo Walton, did acknowledge that she included many Gay characters because in her circle of friends, there were many Gay individuals.  That many people complain that the Politically Correct writers push Gay and other “non-Kyriarchs” far in excess of their actual representation in broader society may be due to those many people in their experience do not live in areas with an inordinantly high number of LGBTQ&c. individuals, or live in areas with White majorities, and thus those many people are complaining that the new Politically Correct stories do not jive with their own experiences, and thus feel it is being pushed on them for the sake of it being pushed in an attempt to normalize the “Social Justice” worldview.  That the response to this was to shout out “we exist” to the cheer of a room full of individuals who are not representative of anything other than the demographics of Tumblr, sheds doubt upon the case of the panelists.

The WorldCon has never been under the sway of conservatives, but it is only now becoming exclusive of those who are not head-over-heals for “Social Justice” and far-Left insanity.  It is yet another example of O’Sullivan’s First Law: “Any institution that is not explicitly right wing will become left wing over time.”  While popular authors will continue to do well, the Hugo’s will likely go the way of “modern art” which is appreciated only by a snobbish exclusive elite.