According to Academia, Mountains are People Too

We are familiar already with how glaciers are misgendered, but now we can learn about how to get intimate with… mountains.

A graduate student at the University of North Carolina at Chapel Hill, Bryanne Young, suggests just such a course.

Let us, again, state the usual elements of these “academic” papers: Feelz over Realz; blaming Whites, men, straights, &c. for the problem (the more intersectional, the better); and, of course, heavily reiterating the work of others.

For a taste of the insanity, the Abstract:

“This essay engages feminist science studies and theories of performativity to inject with dynamism familiar figurations of static being. Through the modalities of ethnographic writing, memory, and embodied experience, I enact a lively engagement with Canada’s Rocky Mountains. By shifting the way we understand this unique, constitutive feature of the Canadian West, I suggest an approach to ethics that expands categories of agency, disaggregating it from realms of human exceptionalism. Through the analytic of performativity, I attend to the dynamic and agentive capacity/ies of glacial bodies, mountains, and lichen—nonhuman bodies considered passive and inert by prevailing epistemologies—to make/materialize meaning. I animate the argument that what we call nature is not a passive, immutable surface on which culture is inscribed, but rather is the production of active, agential practices, each containing divergent wills to power immanent with the capacity to make cuts of their own. The aim of this writing is to think through how mountains, and other such complex living systems, might pose a necessary series of questions to prevailing epistemologies and systems of epistemological capture.”

Right out of the gate, the author invokes not just natural and scientific elements, but something akin to a spiritual longing, when it comes to mountains:

Lady, it’s called having an acid flashback.  To try to keep the reader from getting too drawn in, some mood music will be included…

“Furthermore, it can productively work to deconstruct what physicist and philosopher Karen Barad (2003) calls the thingification of the world: the deadening transfiguration of phenomena and relationality into a static series of objects/things.2 By engaging what I call a posthuman performativity, whose point of origin is latent in Judith Butler’s earliest elaborations of the concept, I interrogate and revitalize static concepts of embodiment, agency, relationality, and materiality. My aim in doing so is to contribute a useful theoretical framework for developing more nuanced understandings of bodies and embodiment, pointing to the necessity of taking seriously the materializing epistemological cuts we enact when we frame our understanding of the world.”

Ah, the type of “nuance” one gets by dropping enough acid to make the late Syd Barrett say “WTF?!”

So, rather than study nature by natural laws and the scientific method, the author suggests we ignore the oppressive realz for the liberating feelz.

The author then tries to give a wikipedia-level description of the Canadian Rockies, but devolves into pseudo-poetics such as “muscular and turgid waterways”.  This quickly devolves into a pseudo-autobiography, describing about how the mountain range “formed much” of her “selfhood”.

“Any writing of/on this/these bounded space(s) is thus a tracing of this/these intimacies, where the doing of this tracing is to perform writing as a holding close the connectivities and interstitial acts of interpretation that, performatively, inter-generatively, structure the mountain-making(itself)-manifest.”

A Ph.D. program is probably not the best way to deal with spiritual longings.

“The notion of ‘breaking and remaking’ is axiomatic to performance studies, whose mandated object is the study of the effects, and series of effects, produced by bodies—in other words, in the creative capacities of performativity.”

Yet again, the “Q.E.D.” is pre-determined before the question is even asked.

“[P]erformativity is the inherent dynamism central to its unfolding, in the shift between embodiment as a state of being, to embodiment as an active doing.”

This some type of pathetic attempt at Yin-Yang?  Mountains do not have motive will.  Mother Nature is just symbolic.  Gaia ain’t real.  So yes, these “academics” are religious nutballs.  Also, most of this section involved reiterating the opinion of another academic, Judith Butler, and the author trying to shoehorn her feelz into someone else’s idead in the pathetic attempt to seem like the author has an original thought.

“The continuity of life over time, in other words, is repetition, but it is repetition with a difference, repetition with/in infinite difference(s), in which difference is productive and responsive, creative, adaptive, and made manifest/intelligible as transcription/inscription: as Barad … describes it, ‘part of the universe making itself intelligible to another part’ …, the simultaneous marking of a present that is never self-same, and a conditioning of a future that remains open to possibility and radical alterity.”

It’s almost as if all the drug-addled hippies got jobs teaching bulls**t degree programs in universities… oh, wait…

“Looking at the geomorphology of the Canadian Rocky Mountains thus, the ranges themselves are sedimentation made manifest; they are proof of a living/ moving world, of dynamism and great force, of intensity and the intra/interaction of matter with, and as, time.”

“[All] repetition/representation is split by the absence that makes it necessary, where that which is absent is the existence through space and time of an originary form durable enough to make repetition, iterability, descent, unnecessary.”

So far this “academic” journal article is reading like a drug-addled travelogue/flashback mashed up with the lunatic “academic” opinion of others.  But hey, it’s all about the feelz, isn’t it?

“[The] elaboration of arche-writing usefully explicates is that all writing is always a co-writing, always the opening up of becoming, represented, inscribed, interpreted as if it is being—in other words, performance—which always points to an originary breach that afflicts everything one might want to hold sacrosanct: like self-presence, like knowledge of the world, like being-in/as-itself.”

So, why weren’t the mountains given credit as a co-author of this paper?

“This Derridean-inflected engagement with inscriptive practices and acts of translation and interpretation usefully decenters/destabilizes the anthropocentric perspective that agency is the sole property of human subjects who, alone and as independent agents, inscribe, interpret, repeat, and re-present—as given—the materiality of the world.”

Mountains don’t have agency.  Yet again, feelz over realz.

“They are communicative—parts of the universe making themselves intelligible to other parts—and indexical of an originary split in the structure of being that holds the future open to possibility, improvisation, alterity, indeterminacy.”

And then we get to lichens…

“For lichens to exist as an organism, there must be a relationship between two entities, an alga and a fungus, the ongoing dynamics of this intra/interactivity embodying what we mistakenly perceive to be a homeostatic form of inert/barely animate life, a separate determinately bounded and propertied entity: lichen.”

Of course this becomes philosophical…

“What I find particularly enchanting about the propagation of lichens is that they have no known organizers, unlike the growing tips of higher order plants.”

Ah, the spontaneous organization from the bottom-up, just like what is supposed to happen in various Marxist veins of thought… including anarcho-syndicalism…

And being oh so scientific, the author waxes poetic about how Darwin was being “fictive,” “enchanting,” and “[c]alling on evidence from beyond our senses”… 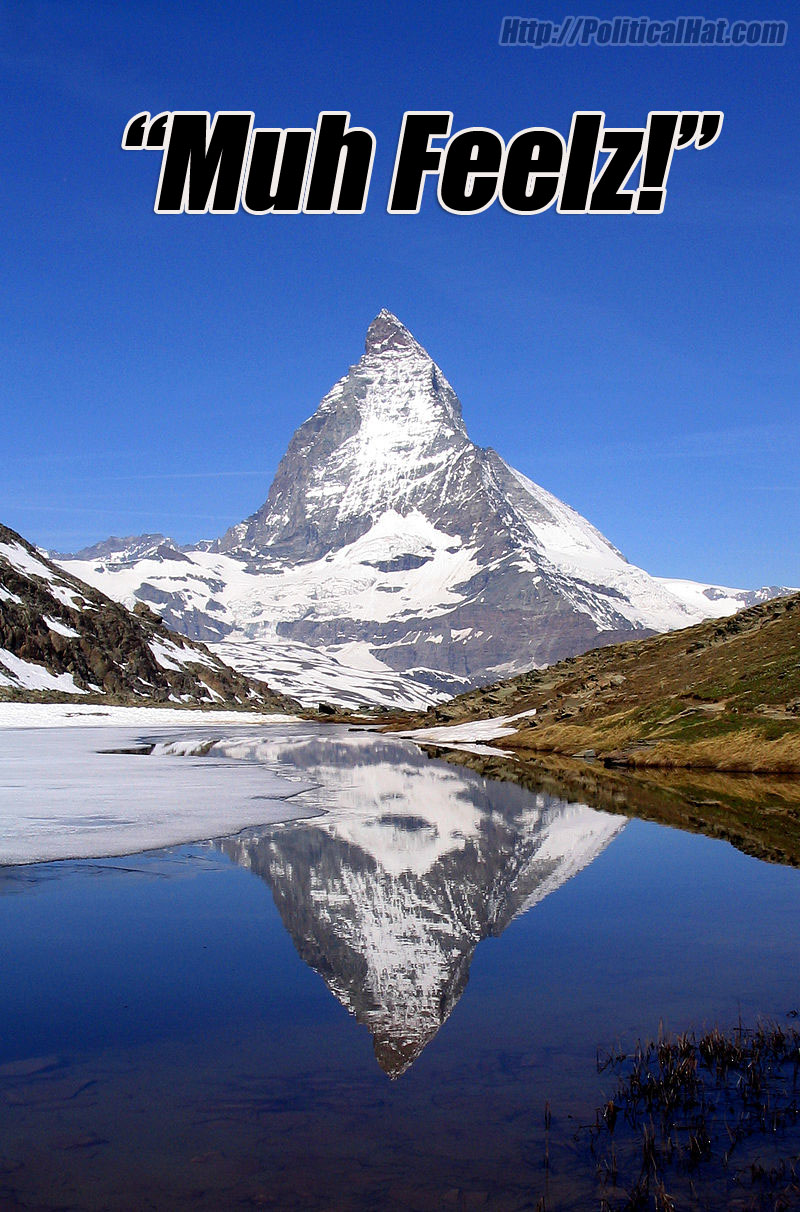 And yes, this is all about how Darwin and mountains inevitably lead to oppressive gender norms…

“Yet, over the processes of normalization/naturalization, the mythological, fictive force of theories subsides into the given, the factual, the way things are—their narrative power becoming elided with their explanatory power. This phenomenon whereby, what Beer […] calls, ‘the arc of desire’ […] transforms the conditional into the actual, the theory into the ‘fact,’ bears a striking resemblance to Butler’s description of the performed repetition into ‘fact’ of gender norms.”

“In the contemporary context of struggles over wild spaces against development, resource extraction, and industry, and immersed as we are in the legacy of moralism and ethnocentrism that led, for instance, to the historically sedimented acts (ongoing) of marginalization of its First Peoples, we need to continue to engage with, and generate, heuristic fictions that allow us to think through and forestall the moralization and anthropocentric metaphysical presuppositions that shore up, as fact, the facet of nationalism that relies on logics of exclusion and marginalization drawn along the axis of human/other.”

Yup, you know there just had to be some type of intersectionality!

The article in question, for the reader’s own fisking thereof:

2 Responses to According to Academia, Mountains are People Too