What Rough Progressive, Xirs Hour Come Round At Last

The very pillars of society are being rent asunder, and the mores, customs, and folkways that evolved over countless centuries to provide that ever-so rare balance of virtue and liberty being discarded willy-nilly, by Progressives, who in their mad pride of pseudo-intellectuality, believe that they can create utopia ex nihilo and in vacuo of reality, with themselves as the (un)intellegent designers.

“krakatoa“, an Ace of Spades HQ “cob-logger”, succinctly lays out what the Progressives are doing to America:

“Things in this country are spiralling quickly to the very anarchy these mobs are agitating for. The systematic ‘Progressive’ undermining of the social structures that provided the foundation of our country’s incredible rise is almost complete, to the point where we have to endure ‘serious discussions’ about whether or not people should have to use their biologically appropriate public facilities. Meanwhile, very real and very obvious lawbreaking is ignored or, if ignoring it is impossible at the moment, it is ennobled by the ‘intellectual’ class, so long as those acts are committed by the ‘right’ people, in service of the ‘right’ causes. The narrative must be maintained.

“There doesn’t seem to be a cause that the Left cannot take to the most irrational and contentious conclusion, and every cause now requires the submission of the people, of ALL the people, in deed and most disturbingly, in mind. Dissenting thought is punished with social stigmatizing and with campaigns to remove private citizens’ livelihoods, and the drive is fully under way to codify the Left’s terroristic swatting tactics and to legitimately punish with the full force of the state anyone who is guilty of stating a belief that was altogether unremarkable less than a decade earlier.

“The Left is on a blood drive, quite literally, and the donor is every single productive member of society, whether they realize it yet or not.” 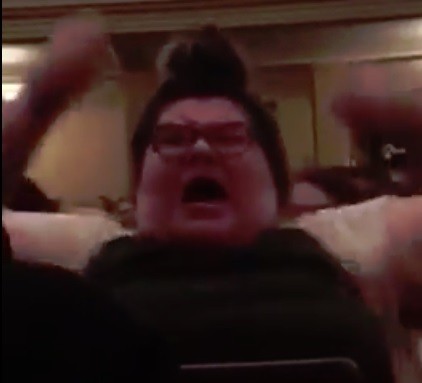 Indeed.  At this point we must ask ourselves, what rough beast, its hour come round at last, slouches towards Bethlehem America to be born?

Sadly, we are likely to learn first-hand…

2 Responses to What Rough Progressive, Xirs Hour Come Round At Last