The Second Rape of Germany

While Feminists too busy dealing with the misogynistic plague of manspreading and men not sitting down to urinate, over 1000 of Europe’s friendly neighborhood “refugees” decided to get rape, assault, molest, and rape German women on New Years Eve.

Testimony from of some such victims:

“German newspaper Bild reports the testimonies of other young victims. Using pseudonyms to protect the idenities of the young women involved, the paper reports the words of 18-year-old Annika who said of her first-ever trip to Cologne: ‘It was scary. Mainly because a nobody helped. I feel so dirty. So used.’

“‘They all looked foreign. They managed to separate us in the crowd and got close to us… we tried to fight off their hands…. everywhere I looked I saw girls crying and being comforted,’ she said. Annika also added that her friends’ purses had all been rifled during the ordeal; and when she found a police officer later to report the assault, he just told her to go to a police station.

“Another young woman, 25-year-old Anne who was waiting tables at a night club, said she went outside for fresh air during a break in her shift and was attacked by a group of Arab men. They pulled her dress and tore her panties off before running away.”

Meanwhile... at the refugee processing center...

These woman were in fear for their life:

Unsurprisingly at this point, the elitists in charge, such as the city of Cologne’s mayor, were quick to offer her sympathy for… the molesters. Cologne Mayor Henriette Reker refused to link sexual assault perpetrated by refugees with… the refugees who committed sexual assault!  She went on to say:

“The women and young girls have to be more protected in the future so these things don’t happen again.

“This means, they should go out and have fun, but they need to be better prepared, especially with the Cologne carnival coming up. For this, we will publish online guidelines that these young women can read through to prepare themselves”.

The German interior minister doubled down on this insanity by declaring that expressing outrage that these so-called refugees would rape German women is as horrible as the sexual assaults themselves!

“What happens on the right-wing platforms and in chatrooms is at least as awful as the acts of those assaulting the women,” the interior minister said. “This is poisoning the climate of our society. “

This expression of wrongthink is even being punished!

This was not limited to the city of Cologne, though, with sexual assaults occurring in every major German city… and even in Austria!

The question is, will this rape of Germany be as bad as the on in 1945 when Soviet troops raped and murdered Germans as the Soviet Union invaded Germany?  Considering that during World War II, the Germans were trying to stop invaders from coming in, while the current German government is blindly importing anyone they can, the future looks grim… 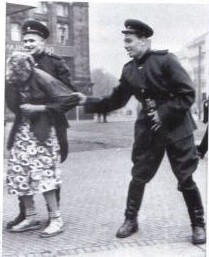 Update: Finland and Switzerland have also been victims of refugee gangs; all of Europe is DOOMED. However, not all Germans are oblivious to reality considering they’ve snatched up all the pepper spray available, but that will do only so much when your own government is working against you.

This entry was posted in Uncategorized and tagged DOOM, Europe. Bookmark the permalink.