The War On Boys: Lego Edition

Posted on December 2, 2015 by The Political Hat

#GenderJustice has come to a Washington state kindergarten.  Because the boys tended to play with Legos while girls didn’t, a so-called teacher has decided that this is oppressive and responded by… not only banning boys from playing with Legos, but lying to them about it!

“They can have their pick of Tinkertoys and marble tracks, but the colorful bricks are ‘girls only.'”

“Although her approach might anger some parents, Keller is sticking to her guns: It’s all part of a plan to get girls building during ‘free choice,’ the 40 minutes of unstructured play time embedded at the end of every school day.”

Why is this so-called teacher doing this?  Because boys tend to be better on average when it comes to spatial and math skills, and “fairness” requires the teacher to educationally kneecap little boys even more than they have been already:

“Lego play, Keller found, has been widely attributed to accelerating development and helping children fine-tune spatial and math skills, two of the largest areas of cognitive disparity between men and women.” 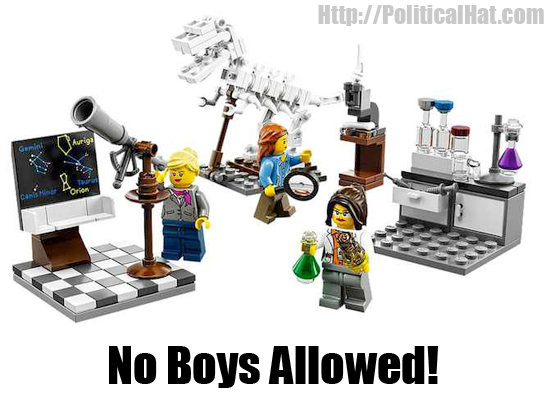 Of course, the girls just weren’t interested in it like the boys were.  That boys prefer some toys while girls prefer others, even in the face of a concerted effort to subvert biology.

“At first, Keller tried enticing her girl students with pink and purple Legos.

“‘But it wasn’t enough,’ she said. The girls weren’t interested and the boys just expanded their palettes.”

Punishing boys is being declared a question of “fairness”:

“In Keller’s mind, it’s a fair practice ‘because fair is getting what you need to succeed or to get better.’ Fair doesn’t have to be the same, and she says her kindergarteners get that.”

Funny how, “fairness” never extends to holding girls back in areas where they tend to dominate boys educationally, such as with reading.  It only applies to punishing boys in areas where they excel while allowing girls to blow past areas where the girls excel.  It is this type of mindset that has led to females dominating bachelor’s degrees in almost all field, and only being significantly behind in engineering.

This entry was posted in Education, Progressives and tagged Gender, Kyriarchy, Leviathan. Bookmark the permalink.