A Feminist Epistemology of Mathematics

Posted on December 1, 2015 by The Political Hat

Apparently one plus one equaling two is an oppressive social construct.  Don’t take my word on it, just read a peer reviewed article entitled “Moving Towards a Feminist Epistemology of Mathematics”! 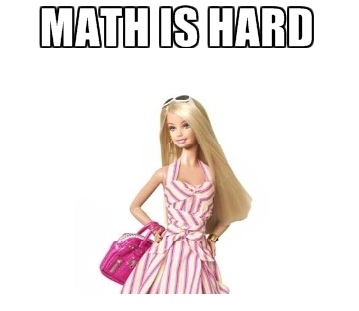 The peer reviewed article, appearing in Educational Studies in Mathematics (Vol 28, No. 3, pp. 275-291) is worthy of a fisking.  While many passages are repetitive or vacuous, the major idiocy will be pointed out for your reading pleasure…

N.B. References noted in text will be omitted for ease of reading.

“Received science has been criticised on three grounds from a gender perspective. The first is its reductionism and its claim to be objective and value-free. Second, the conventional style of learning and teaching in science, its pedagogy, has been challenged. It is suggested that enquiry methods used by scientists are often intrusive and mechanistic, separating observer and observed, and reinforcing competition. Further these methods a presented not only as ‘correct’ but also as the only way possible. Third, having rejected objectivity as an untenable criterion for judging science, a new scientific epistemology was required and has been derived  by examining the connections between the discipline and those who use it, and the society within which it develops. This line of reasoning is consistent with a broad range of thinking in the sociology of science.”

To translate from academic gobbledygook to plain English: Math is sexist because it’s not subjective and open to interpretation; there is no such thing as a “correct” answer; and pedagogical idjits need to come up with politically correct nonsense that eschews actual mathematics.

“Mathematics tends to be taught with a heavy reliance upon written texts which removes its conjectural nature, presenting it as inert information which should not be questioned. Predominant patterns of teaching focus on the individual learner and induce competition between learners. Language is pre-digested in the text, assuming that meaning is communicated and is on-negotiable.”

That is because 1 + 1 = 2.  This is not conjectural.  You are free to question it.  Understand the proof and disprove it or provide your own contradicting proof.  And the point of teaching mathematics is to teach mathematics to the individual.  It either is or is not; there is no “negotiation”.

“Indeed, the supposed ‘objectivity’ of the discipline, a cause for questioning and concern by some of those within it, is often perceived by non-mathematician curriculum theorists as inevitable”

That is because non-mathematicians (as well as non-Engineers, non-Scientists, &c.) don’t know what they are talking about.  If you think that mathematics is subjective, you shouldn’t be pontificating on it or how it is like all oppressive and stuff.

“Adopting an objectivist stance within mathematical philosophy means accepting that mathematical ‘truths’ exist and the purpose of education is to convey them into the heads of the learners. This leads to conflicts both in the understanding of what constitutes knowing, and of how that knowing is to be achieved through didactic situations.”

That is because mathematical truths do exist, and can be rigorously proven.  It they are false, than it is because someone was incorrect, with such incorrectness being demonstratable.  While certainly how people understand things can vary, it does not change that how people understand a demonstratable truth does not alter that a mathematical truth can be objectively validated.  Studying such rigorous methods for determining mathematical proof provides discipline to the mind, and ought to be seen as an educational good in and of itself.

“Proposed as an alternative, social constructivism is a philosophical position which emphasises the interaction between individuals, society and knowledge out of which mathematical meanings created. It has profound implications for pedagogy.”

1 + 1 = 2.  This is not socially constructed.  The interaction between individuals, society and knowledge is irrelevant.  The only question is what is the best way to teach mathematics.  Any pedagogy that denies the rigorous and objective nature of mathematics is necessarily doomed.

“‘Physics and chemistry, mathematics and logic, bear the fingerprints of their distinctive cultural creators no less than do anthropology and history.'”

1 + 1 = 2.  PV = nRT.  E = mc2.  These are not dependant on cultural interpretation; they just are.  How one might teach this to different individuals, such as a Finn in high school verses a San from the Kalahari, has nothing to do with the objectivity of what is being taught.

“In his discussion of mathematical epistemology, Joseph (1993) drew attention to two major philosophical pre-suppositions which underlie Western (European) mathematics. These are, first, that mathematics is a body of absolute truths which are, second, argued (or ‘proved’) within a formal, deductive system. However, he pointed out that dependence upon an axiomatically deduced system of proof was a late nineteenth century development which was pre-dated by ‘proofs’ closer in style to that of non-European mathematicians”

I’m pretty sure that Newton and Leibniz would both laugh at the author for such idiocy.

“Joseph is criticising the dominance of a Eurocentric (and male) mathematical hegemony which has created a judgmental situation within the discipline whereby, for example, deciding what constitutes powerful mathematics, or when a proof proves and what form a rigorous argument takes, is dictated and reinforced by those in influential positions.”

So… Mathematics is a tool of the Kyriarchy???

“[Jerome Bruner] made out a case for understanding being viewed as both on textualising and systematising and he advocated a route to contextualising in a disciplined way through narrative. From this perspective, codified mathematics can be viewed as reified narrative and it no longer seems so absurd to ask how different narratives, or stories, might constitute alternative mathematics (in the plural).”

No.  It is absurd.  Mathematics is mathematics.  While there are different branches of mathematics, there are not “alternative” mathematics where the same demonstratable proof can have different meanings depending subjective cultural norms.

“The feminist literature on the philosophy of science I find very valuable for the clarity with which it has sharpened the critical debate on the nature of knowledge in science and how that knowledge is derived.”

Anyone surprised that this idiocy has its roots in Feminism and Critical Theory?

“In what ways might the questions, or the styles of enquiry or the mathematical products differ if mathematics were to be admitted to be a sociocultural construct?”

Then it wouldn’t be mathematics anymore.

“However, ‘objectivity is a variable; it is a function of the generality of social interests'”

Clearly the author does not understand the meaning of the word “objective”.

The author lists “exclusionary methods” based on “Female-Friendly Science“:

“expanding the kinds of observations beyond those traditionally carried out;”

This has nothing to do with the presence or lack of a “women’s experience of knowing and doing”.

“increasing the numbers of observations and remaining longer in the observational stage of the scientific method;”

Again, how is this a “female” thing?

“accepting the personal experience of women as a valid component of experimental observation;”

“being more likely to undertake research which explores questions of social concern than those likely to have applications of direct benefit to the military;”

The stereotyping is strong with this author.  What is explored and why it is explored does not effect the science of it, or mathematical truths determined.

“working within research areas formerly considered unworthy of investigation because of links to devalued areas;”

Again, this has nothing to do with the validity of the mathematics or science.

“formulating hypotheses which focus on gender as an integral part;”

So much for the pure sciences!

“[A] Platonic approach to mathematics in that he propounded a discovery, rather than an invented, perspective on the discipline. That is, mathematics is out there waiting to be uncovered rather than within the head (and possibly the heart?) of the mathematician.”

Mathematics is all about feelz now???

“The contradiction would appear to lie in a different perspective on the mathematician than on mathematics itself… a mathematical statement, once articulated, as being absolute, that is either right or wrong, and its status verifiable by any interested party.”

That’s because it is.  That is the entire point of the study of mathematics!

“Once we re-focus from knowing that a particular mathematical outcome exists to knowing why that outcome is likely under particular circumstances, we are distinguishing between the ‘objective’ knowledge of the outcome and the ‘subjective’ knowing which underlies how to achieve that outcome.”

There is no “why” in the philosophical sense.  Asking “why” an apple falls on someone’s head as it appertains to understanding the objective nature of gravity is completely different than a multi-cultural understanding of why things happen; in the former case it is a question of objective truth, in the later, it is empty philosophical musings or a religious faith of fate.  Something is mathematically true or it isn’t.  How that objective truth is used is a completely unrelated question, which itself is distinguishable from whether it would work or not.

“Recounting different narratives, speculating about their similarities and differences, querying their derivations and applications, denies ‘objectivity’ and reinstates the person and the community in the mathematics.”

An equation is not a “narrative”.  A chemical reaction or the effects of gravity are not “narratives.”  They simply are.  While putting results and scientific inquiries into the form of a narrative might be useful for conveying the desired information, such “narratives” are just tools for conveying objective truth, and can not alter such truths.

“Knowing mathematics would… be a function of who is claiming to know, related to which community, how that knowing is presented, what explanations are given for how that knowing was achieved, and the connections demonstrated between it and other knowings (applications).”

Mathematics, chemistry, physics, &c. is only a function of objective reality.

The author seems to conflate the discipline of mathematics with ways of teaching or understanding it.  This varies from person to person, and certainly between cultures and the sexes.  But the objective truth of mathematics (and hard sciences such as chemistry and physics) is not variable.  One plus one can not equal both two and three at the same time.  A chemical reaction being endothermic or exothermic is not dependent on one’s sex or their cultural point of view.  The Sun does not rotate around the Earth just because one subjectively decides it does based on what cultural community one belongs to.

To put it bluntly, this peer-reviewed article is bulls**t.

The full article, for the purpose of criticism and critique, can be read below.

Moving Towards a Feminist Epistemology of Mathematics

3 Responses to A Feminist Epistemology of Mathematics