The Ludovico Technique comes to the NIH

Posted on November 5, 2015 by The Political Hat

The National Institute of Health has spent so far over $100,000 to “cure” bullying by eliminating one’s moral campus, moral choice, and moral agency.  ‘Twould seem that the Ludovico Technique is not limited to fiction.

“Researchers at Columbia University want to see if they can ‘successfully regulate’ disgust emotions in teens in order to stop bullying.

“‘Whether it’s being the victim, being the perpetrator, or having to watch this upsetting cycle of peer rejection and victimization, few adolescents are unaffected by bullying’s harmful impact,; a grant for the project states. ‘This effect can last long past adolescence, as both being the bully and being the victim are linked to the development of both short- and long-term anxiety and depressive disorders.'” 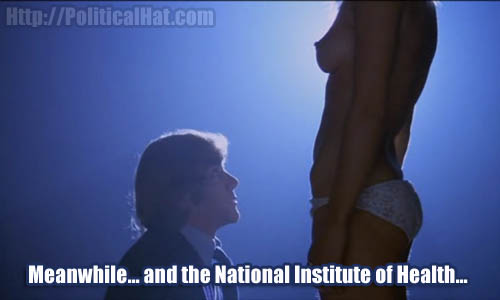 Unlike the Ludovico Techinique in A Clockwork Orange, where disgust and revulsion to train the young droog Alex to not rape and murder by Pavlovian training, this new line of “research” attempts to abolish disgust, and thus any moral revulsion.  This is because the researchers believe that revulsion and disgust is the cause of ” homophobic, sexist, and racist attitudes” by manipulating the “moral toolbox”.  In both cases though, moral agency is robbed and actions are either compelled by pain or by removal of self-restraint.

“‘At some point during development, individuals begin to consider actions and behaviors that do not involve others being directly harmed to be morally wrong (e.g. homosexuality),’ the grant said. ‘In adults, this type of non-harm based moral condemnation is often underpaid by disgust, an emotion that has been linked to increased homophobic, sexist, and racist attitudes. However, when disgust begins to enter the moral toolbox and how it informs moral condemnation and social rejection within childhood and adolescence remains unknown.’

“‘We will test a model that proposes that the relationship between disgust, moral condemnation, and social rejection is a learned one that reaches its peak during adolescence, a period marked by increased emotional reactivity and social hierarchical concerns,’ it said.”

It is the ultimate Progressive fantasy where the perfect human is engineered via Intelligent Design, abet with not-so-intelligent designers…

This entry was posted in Progressives, Science and tagged Leviathan, Science, Social Justice. Bookmark the permalink.

One Response to The Ludovico Technique comes to the NIH