The Left, particularly in Europe, it declaring a de facto manichean choice:  Denounce thyself as a “White Supremacist” and oppressor, or accept the sin of one’s own culture and accept Dhimmitude and submission to the morally superior “immigrants” who are overwhelmingly male and of prime age for men.

This is a false choice.

Immigration without Assimilation is Invasion.

Perhaps the failure to destroy all the Jooos has driven the Europeans to just destroy themselves in order to satisfy some nihilistic urge amongst the elite? Perhaps they are so enamored with Keynesian insanity that they believe that a workforce facing a population implosion that hands out infinite welfare handouts to foreigners will create an economic paradise?

In a strong and self-loving country, a wave of millions of “refugees” would result not in surrendering one’s country to be swamped by the same cultural and moral system that destroyed the homes of the so-called-refugees, but in said strong and positive country to embrace the virtue that Livy so captured:

“There was one people in the world which would fight for others’ liberties at its own cost, to its own peril, and with its own toil, not limitating its guaranties of freedom to its neighbors, to the men of the immediate vicinity, or to countries that lay close at hand, but ready to cross the sea that there might be no unjust empire anywhere and that everywhere justice, right, and law might prevail” 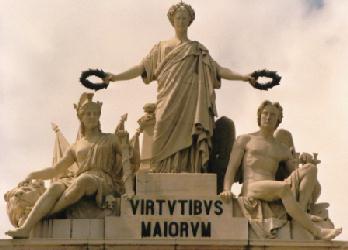 Sadly we are past that.  We are now accepting blindly Brecht‘s praise of replacing society with those who are more amenable.

But this is not the state of Europe.  Europe is moribund, and moribund by choice of it’s unelected elite.  The Progressive hatred of the society that they want to replace with a deluded sense of “utopia” has demanded that their own children accept servitude as a requirement!

Their own homes are declared to be homes of “refugees” who have no allegiance to the countries that have accepted them!  Why when local communities have any problem with an invasion of cultural aliens who refuse tolerance and demand blind acceptance and Dhimmitude, those localities are accused of “racism”… because opposing one’s daughters being used as bargaining chips by alien invaders is not racist and beyond the pale!  Seeing one’s daughter raped and beaten is far more morally pure than telling people who want to enter unto your society to accept the precepts of your civilization!

It is so bad that real refugees who appreciate everything they have, primarily freedom, are now denounced as even worse than racist!

Rather than be grateful for the acceptance and giving they’ve been shown, the so-called-oppressed whine and demand more and more!

The liars of the Left say that this is but raaaccciiisssm!!1!

There is a shining beacon.

If you want to join what that beacon promised, you are welcome.

If you want to destroy what the beacon stands for, you will be opposed.

Race is irrelevant. Only virtue and love for liberty matters.

One Response to The Left’s Manichean Choice: Racial Supremacy Vs. Dhimmitude