Your humble author has not affinity for the Confederate battle flag* and disdains those who would use it as a symbol of hatred or racism.  But said flag has been raised as a non-racialized symbol, including by many Blacks.  The question is, is the flag an expression and act of terrorism?

“A Georgia grand jury formally charged 15 members of a group supporting the Confederate flag on terror charges following a July confrontation with a black family who was celebrating a child’s birthday, according to an indictment released Monday.

“Douglas County District Attorney Brian Fortner said members of the “Respect the Flag” group violated the state’s Street Gang Terrorism and Prevention Act and made terroristic threats when their caravan of vehicles bearing the rebel flag drove past a neighborhood party.

“‘We do want to say that we respect the rights of all citizens to exercise their First Amendment right, but we’re going to require them when they’re doing that to respect the right of all of the citizens to feel safe,’ Fortner said at a news conference attended by FOX5.”

First off, the accounts of the incident are contradictory and what has or has not happened are not clear to you humble author.  But the statement that the “right… to feel safe” trumps the 1st Amendment is abhorrent.  The right of free speech is can only be curtailed in extremely rare and endangering situations.  Waving a flag… ANY flag does not rise to that level. 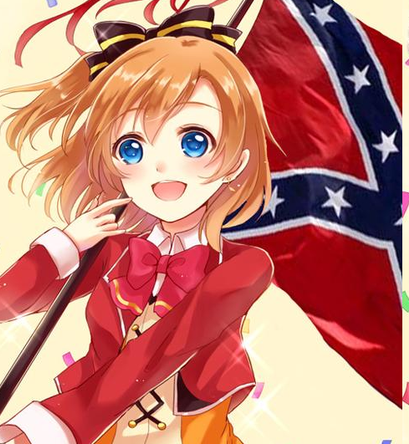 There are charges that including brandishing firearms at a child’s birthday party.  If true, that those individuals that brandished firearms should face justice.  But “terrorism” it isn’t.  If these Confederate battle flag* waving terrorists crashed a airplane into the party, then they’d clearly be terrorists, but brandishing a weapon in another type of crime all together.

There are reports to support criminal sanctions against some of the pro-flag protestors:

In defense of such charges, contrary reports were made:

“One of the truck drivers named in the indictment, Levi Bush, told the newspaper in July that his group was leaving an event and just happened on the party. He said the party-goers started yelling at them and throwing rocks.

“Bush said he tried to drive away but got a flat tire and pulled into a driveway, where party-goers surrounded him and made threats. He conceded that a racial slur may have been used while his friends were trying to defend themselves.

Exactly what happened, and who is to blame for what, remains to be seen and your humble author will not pass judgment.  That being said, claiming that this was “terrorism” seems a stretch, at best.

Above all else, the censorship and punishment for flying the Confederate battle flag* is far more antithetical to freedom than labeling anyone who flies such flag a terrorist.

*          Yes, the flag that was flown is the Confederate Naval Jack, and not the square Battle Flag, but there is little reason to quibble about it…

This entry was posted in Uncategorized, War & Terror and tagged Leviathan. Bookmark the permalink.