The Ultimate Threat to Democracy in Europe is the EU

Anti-EU parties won an absolute majority in the Portuguese parliament in recent elections.  They will be barred from forming a government by pro-European Union forces.

“For the first time since the creation of Europe’s monetary union, a member state has taken the explicit step of forbidding eurosceptic parties from taking office on the grounds of national interest.

“Anibal Cavaco Silva, Portugal’s constitutional president, has refused to appoint a Left-wing coalition government even though it secured an absolute majority in the Portuguese parliament and won a mandate to smash the austerity regime bequeathed by the EU-IMF Troika.”

The block was effected by the constitutional President, Anibal Cavaco Silva, who said that “the great majority of the Portuguese people did not vote for parties that want a return to the escudo or that advocate a traumatic showdown with Brussels”… despite the fact that that is what electorally happened. 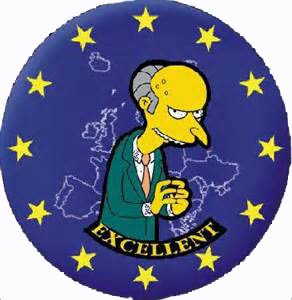 For some time, in non-monarchical parliamentary republics, the selected “President” has been considered but a ceremonial post with powers that were not expected to be exercised.  But Pro-EU/anti-democratic forces are using these heads of state to increasingly thwart parliamentary democracy (Italy is yet another example of this).

Agree with the anti-EU parties, who in this case are far Left, or not, but dispensing with democracy when you disagree with while standing behind it when you do, is hypocritical at best.  A check upon a temporary parliamentary majority is good and sober, but it ceases to be when it is exercised on behalf of foreign powers hell-bent on gobbling up any and all sovereignty of Portugal, and all other members/dependencies of the European Union.  But this time, Portugal will not enjoy the status of a wide-spread empire as under Estado Novo.

This entry was posted in Elections and tagged Europe, Leviathan. Bookmark the permalink.