California Lt. Gov. (and former San Fransisco mayor) Gavin Newsom has decided that Gov. Moonbeam isn’t anti-civil liberty when it comes to the 2nd Amendment, and is pushing oppressive measures that will thrill the elite (who are protected by armed guards).

Amongst the provisions he’d push:

The initiative would also require background check for… ammo.

Already, the City of Los Angeles requires background checks and thumbprinting of all ammo buyers, as well as imposing 10 round magazine restrictions:

Even more frighteningly, it would create the mechanism to confiscate firearms under the guise of “safety,” and ban gunsmiths from making their own custom arms.

It would seem that Gavin Newsom believes in making love (to microphones) and not war (drive-by shootings, gang-banging, and drug related violence aside). 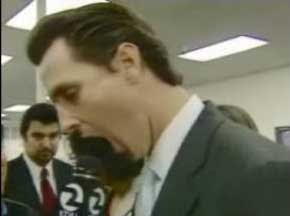