Apparently, the world’s greatest expert on gender and “trans”-ness is a dude, who may or may not be a teenager —who thinks he is a chick and believes himself to be a princess from another dimension — as well as being a pseudo intellectual drug user who may or may not be of Japanese ethnicity (trans-racial?), had decided to tell DAD what is what, because “she” has ideas, DAD… good ideas, DAD!!1!`~eleventy!!1! 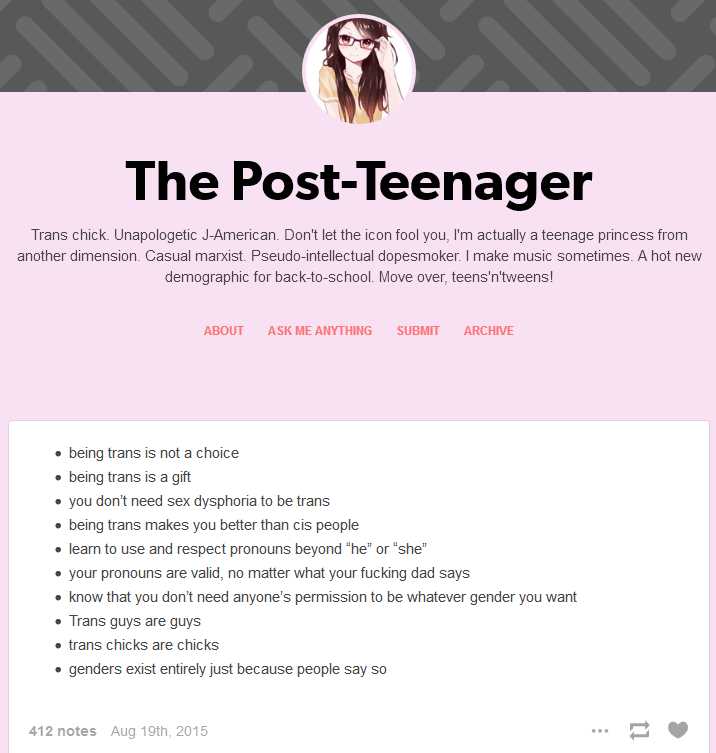 A choice?  Perhaps for some there are some with a legitimate medical dysphoric condition, but most probably have a problem with DAD.

A gift?  Maybe in the same way that some people believe that being born with more than four limbs means you are a re-incarnation of Vishnu… DAD!

If you really think that you are the opposite sex (or some made up gender), you have dysphoria… DAD!

Not being able to accept biological reality does no make you better than people who can, DAD!

Gendered pronouns indicate the biological gender or a person (in modern English).  Yet invented nonsense that represents only feelz is totes cool… DAD?

Trans-guys are just chicks who think they are guys, and visa versa.  DAD!!1!`~eleventy!

This entry was posted in Progressives and tagged FacePalm, FAIL, Gender, Lulz. Bookmark the permalink.