Not his standing in the Republican Presidential primary, but apparently the wish for Walker to follow the footsteps of Custer and be brutally slaughtered by American Indians.  Jodi Webster, who is a member of the Ho-Chunk Nation as well as the Prairie Band Potawatomi Nation, thinks that Governor Walker being beheaded by a little girl is just spiffy! 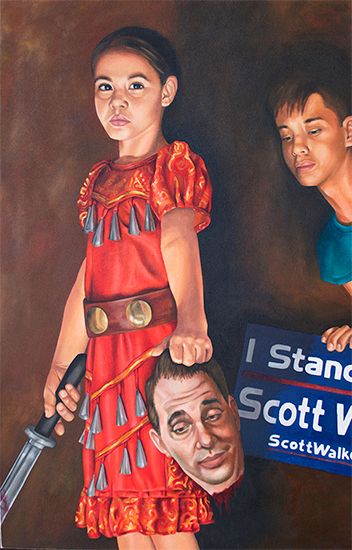 Ms. Webster declared that “My intentions in creating works are to enlighten the perceptions of Native people as well as positively promote women and children.”

Ironically, The only tribal members in the House of Representatives are Republican, as was the last in the Senate.  Let us also not forget Charles Curtis, who was Vice-President of the United States who also descended from the Potawatomi (as well as Osage and Kaw, growing up on the reservation of the later).

Unsurprisingly, the insane and violent loonies of hard environmental Left cheered at this, though it might not be as visceral as they would like…