The Killing Fantasy of the Green Movement 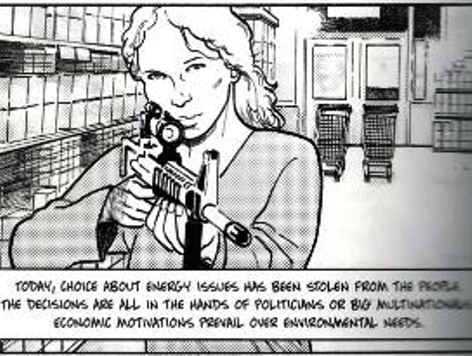 Remember that “Climate Change” commercial which reveled in blowing up children who question the proffered “truth” of “Climate Catastrophe”?  Now we have a comic that revels in murdering Santa Claus to fight climate change.

“[Camille] opens fire and the Santas scream in death agonies as bullets rip into their bodies, with blood spattering. She continues firing as they start collapsing to the ground, while a stream of  ejected shellcases tumble in the foreground and Cokes and Christmas parcels fly  in the air. One Santa lifts his right hand as if to shield himself.

“The book’s narrative is how [Santa murderer] Squarzoni educates himself about climate by interviewing nine experts, who broadly compete to push catastrophism. Three are IPCC sorts. Another three, for some reason, are all eco-economists associated at a high level with a French group called ATTAC (Association for the Taxation of Financial Transactions and Aid to Citizens).   To only select three economists of that ilk is bizarre. Another of the artist’s talking heads is an eco-journalist with Le Monde, the author of European best-seller  How the Rich Are Destroying the Earth.  The eighth source is a French nuclear industry scientist (France gets three-quarters of its electricity from nuclear). The ninth source is a corker, Helene Gassin, who ran Greenpeace Energy campaigns in France for eight years. In 2001 her activists scaled the Exxon Mobil building in Paris during rush hour, and Gassin announced, ‘Greenpeace is going to give warnings in the entire world to companies who support this [anti-Kyoto] decision.'”

What’s worse is that this is targeted to children, and the published has even put out a “Teacher’s Guide” to the comic.  For example:

“For your convenience, this guide is aligned with the Common Core  [US] State Standards (CCSS), specifically the ‘Literacy in Science & Technical Subjects’ strand, and the framework of thematic standards of the National Council for the Social Studies (NCSS).

“‘Global warming causing 300,000 deaths per year… The victims of climate change die slowly, one after another – no drama, no media coverage – scattered over the whole year over the whole planet. If only they had the good sense all to die on the same day, like the victims of the 2004 tsunami, that would catch our attention.”

The full “Teacher’s Guide can be read below:

This entry was posted in Progressives, Science and tagged Green. Bookmark the permalink.