Child molestation advocate Alfred Kinsey declared that only 10% of people were straight with gay and bisexual individuals being a full 90% of the population.  Now-a-days, despite gays and bisexuals probably comprising only a few percent of the population, young people believe that nearly one third, if not more, of the population if homosexual or bisexual.  Throw in a penchant for inventing genders left and right, and you have some deluded fools saying that non-LGBTQ&c. comprise less than 4% of the population! 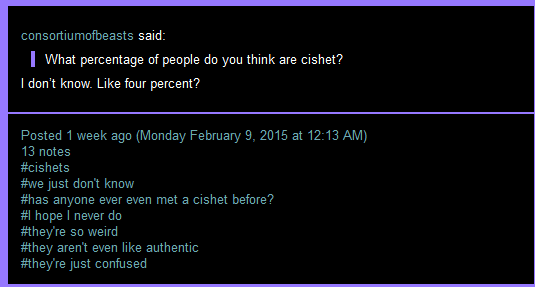 So sure of this, the special little snowflake doesn’t even know if she(?) has ever met a “cishet” before?

This entry was posted in Progressives, Science and tagged Gender, Science, Social Justice. Bookmark the permalink.